A Change of Strategy

I've decided, at least for the moment, to put all my eggs in one basket. I've taken all four of my digital game cameras and deployed them in the dry creek bed in NE Bell County where I've managed to get so many photos over the last month or so. The cameras have now been set up in a sort of picket-line covering roughly a quarter mile stretch of the creek that winds very close to the locations of a couple of recent horse-kills; the suspected work of a big cat or cats. In addition, there have been several credible sightings of a pair of mountain lions in the immediate area over the last couple of months. The sheer volume of photos of other animals walking this creek seems to indicate that it is being used as a travel route. I’m guessing that, if these big cats are still in the area, they will eventually make an appearance in this creek bed.

I spent the better part of the last week cleaning and checking my game cameras in the hopes of getting them all functional and ready for this deployment. As I mentioned above, I currently have four digital models: 2 Cuddeback Excites, 1 Wildgame Innovations IR2, and 1 Moultrie Game Spy M80 at my disposal but have had a few issues with two of them of late.

The two Cuddebacks are old veterans of the TBRC’s long-term camera project: Operation Forest Vigil. They were very high-end cameras 6-7 years ago but are beginning to show their age a bit now. One of these Cuddebacks was the camera that failed to capture any photos the last time around at the West Bell County location. The Compact Flash card seemed to be fine when I checked it but the camera gave me some trouble as I tried to program it this time around. I’m afraid this one may be on its last legs. The other Cuddeback keeps chugging right along, however, and continues to take some nice photos. It is the camera that has taken most of the photos of coyotes over the last few months in NE Bell County. 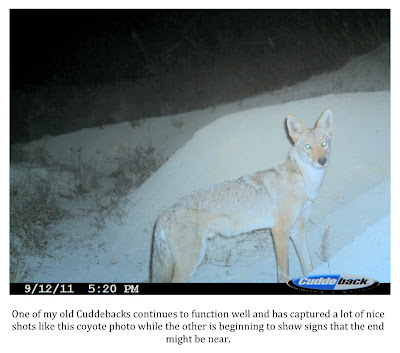 The IR2 is fairly new but is the lowest end camera I have. It cost me only about $60 at Academy. It was hurriedly purchased, on a tight budget, and placed in the field after I was contacted by a property owner who had lost a horse on her property to what they suspected was a big cat. I didn’t want to lose the chance to access this private property in an area where cougars were being sighted, and as my other cameras were already deployed, I ran and picked this one up. Ironically, despite its low cost, it has been the most productive of the bunch the last few months. Whether this is due to good performance or it having been placed in the best location remains to be seen. The IR2 is the camera that snapped the photos of the various animals walking the creek bed in NE Bell County (see my last post). It is pretty solid when it comes to snapping daytime pictures but has an extremely limited range at night as well as a slow trigger speed. There is one photo snapped by this camera, that I have not published, that may be of the mountain lion I’ve been seeking; however, the animal is on the extreme periphery of this camera’s nighttime range and I just can’t tell for sure. I’m pretty confident that if I’d had one of the higher end cameras up at this spot I would have captured a better photo that would likely have allowed me to positively identify this large mystery animal.

The Moultrie Game Spy M80 is probably the best camera I have right now. It is a solid mid-price range camera that cost me about $115. It has photo, video, and sound capabilities. It performed great for the first two sets I had it in NE Bell County but took no photos this last time after being out in the field for a month. After cleaning it up, I found that I had a bad SD card. I have replaced the card and the camera seemed to be functioning well during tests this week. I’m hopeful it was only the card that was causing the camera to fail this last time around. This being my best camera, assuming it functions properly, I have placed it in the location previously occupied by the IR2 camera that produced so many good photos. I’ve got my fingers crossed that this higher end camera functions properly and catches more photos than the lower end IR2 was able to get. 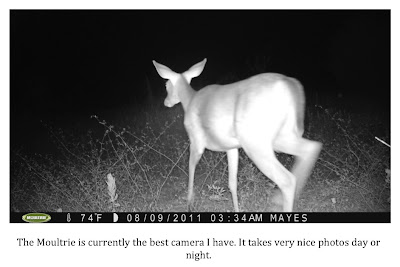 I’ll let the cameras “marinate” for a month or so and see what happens. I’ll likely be retrieving images around the Thanksgiving Holiday. I’ll let you all know what I find then.
Posted by Mike at 4:37 PM