It has been a while since I have discussed the threat that invasive species pose to North American ecosystems. In particular, I have a concern regarding the threat posed by large exotic snakes like pythons, boas, and anacondas to the bottom-lands and marshes of the American south. A recent news story brought my attention back to the issue just this week.

The Huffington Post is reporting that Florida Fish and Wildlife Commission officials captured and killed a 16-foot long Burmese python in the Everglades that had just devoured an adult deer. The deer is estimated to have weighed 75 lbs. You can read the story and see some pretty amazing photos of this snake at the link above. The giant serpent weighed in at a whopping 215.4 pounds with the deer in its belly and 139.1 pounds without it. The snake’s stomach had stretched out to an astounding 44.1-inches to accommodate the deer carcass. 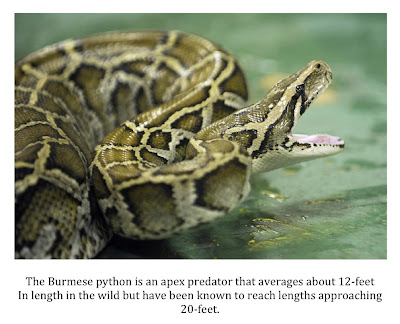 Scott Hardin, the exotic species coordinator for the Florida Fish and Wildlife Commission, is reported to have said that workers found the snake last Thursday and it has turned out to be one of the largest exotic snakes ever found in South Florida. Hardin touted the killing of this enormous snake as an important victory in the efforts of wildlife officials to stop the spread of these giants northward.

Burmese pythons are native to Southeast Asia but have become very popular as pets here in North America. The problem is that the snakes grow quickly and become too much for their owners to handle. A 20-inch baby python can grow to be 8-feet long in only one year. Owners often become overwhelmed and often release them into the wild where they can wreak havoc on native ecosystems. They are very comfortable in southern wetlands and are reproducing quickly. According to the University of Florida , no fewer than 418 Burmese pythons were found dead or killed in Everglades National Park between 2006 and 2007. 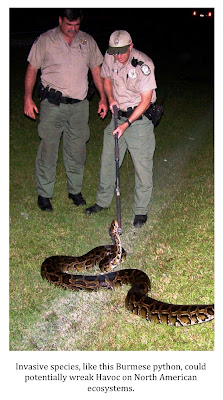 The marshes, swamps, bayous, and bottom-lands of Southeast Texas and Southwest Louisiana are near perfect habitat for invasive tropical constrictors like anacondas, boas, and pythons. I particularly worry about the Big Thicket area of Texas. These invaders would do quite well there. Indeed, there is evidence that the invasion has already started.

So, the next time you hear a tale about a giant snake haunting some lonely swamp in the Lone Star State you might want to think twice before blowing it off. It could simply mean that the invaders have arrived.
Posted by Mike at 11:17 AM