There was a great article published in the December issue of Texas Parks & Wildlife Magazine featuring three of my fellow TBRC members. The article is titled "Sasquatch Stalkers" and was written by Russell A. Graves.

The article features TBRC members Chris Buntenbah, Jerry Hestand, and Lyle Blackburn. Graves questions each of them as to how they became interested in the sasquatch phenomenon and shares an unusual sighting he had of his own with them. Together the group travels to the woods of northern Fannin County, Texas to the spot where Graves had his encounter back in 1986. 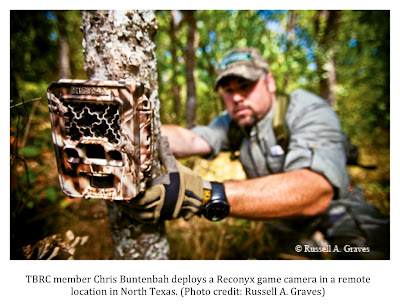 The article is well-written and an interesting look into the different ways people get interested in what would be considered a fringe subject, at best, by most. It is refreshing to see a piece that is written in a straight-forward manner about the subject of the sasquatch and the people that are attempting to document the species.

Check it out at the Texas Parks & Wildlife Magazine site or at the TBRC site. Additionally, Russell Graves has a terrific blog site of his own. Check it out here.
Posted by Mike at 5:39 PM