I received a great email from a gentleman named Chuck detailing a sighting he and his father had back in the 1950's of two black panthers in the Texas Hill Country. Chuck's account is below:

"I was born in 1949 in Kerrville, Texas, as a boy in the 1950's my dad worked as a ranch hand at several ranches in central texas, also called the hill country. As a boy he hired on one year at a ranch just out of Hunt Texas. His job was taking care of a guest ranch. He did carpenter work on the guest cabins, fixed what ever needed fixing and took care of around a hundred horses. 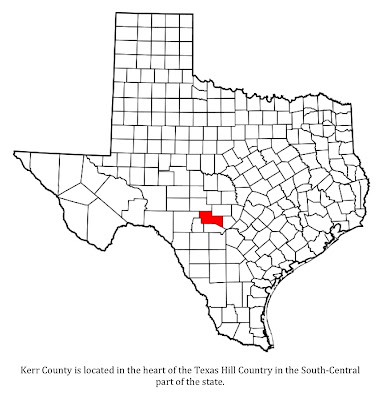 Now towards the end of summer and the approach of fall and the up coming deer and turkey season the owners had him take two 50 pound sacks of corn by horseback to a certain area several miles into the cedar covered hills. At a certain spot we (I got to ride the second horse carrying corn) would leave the corn all layed out for several feet.

One day as we were putting out the corn, I had noticed a small well hid shack about a hundred yards from us. When I asked my dad about it, he said he had built it for the hunters that would be coming before long from the big cities to hunt deer and turkey. He said the owners guaranteed the hunters a deer. I told him that since we had been coming up with the corn for several weeks now the deer didn't even run from us any more and that shooting them would kind of be like shooting fish in a barrel and that at that range I could probably kill one with a rock. He just smiled and said, "Don't seem right, do it boy?" but like I said, they guarantee them big city boys a deer.

Now late one afternoon after we had dropped the corn off and was about half way back to the barn our horses started going crazy, snorting, crow hoping, and trying to turn back. My dad turned around to me and said, "Hold his head up and keep a tight reign, cause your getting ready to see something." It wasn't even a minute after he said that, when a pair of black panthers ran right onto the trail in front of us not 30 feet away. I can remember it like it was yesterday, the horses going nuts, and then staring at something I had only seen once before and that was at night. This was broad day light and up close. As I looked at them, I remember there neon bright yellow eyes first, then how they were hunkered real low to the ground. I would say the second thing I noticed was the size. They were pretty darn big, about the size of a small mountain lion, jet black with the long mountain lion like tail. They only stayed about 10 seconds at most, then was gone as fast as they came. 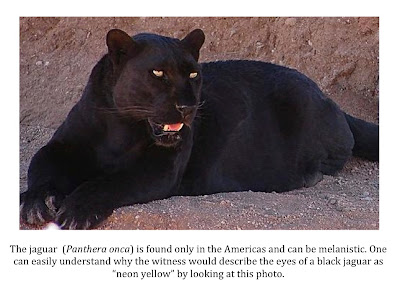 After we finally got the horses to settle down and I had time to ask my dad what the heck I had just seen he said, "That was a pair of yearling Black Panthers." Now my Dad was a real Texas cowboy, as was his, and his before him. He didn't talk a lot but when he did what he said was sure worth listening to, and I never knew him to lie are stretch the truth. Like I said, this was the second time I saw a black panther as a boy. So if you want to believe they're not there, well, I suppose that's your right, but as for me, I know better. This by the way is the same area I use to wander off for a bit while my dad was putting out the corn and play pushing sticks and leafs across a giant 3 toed foot print set in solid stone, only later in life did I come to know what I had been playing in.

P.S. Even to this day I could go straight to that spot. If you doubt what I'm saying, I now live in Oregon."

Of course, I have no way to verify this account. Chuck could be pulling my leg, I suppose, but he did leave his full name and email address which certainly adds to his credibility, in my eyes. I certainly find no reason to doubt his truthfulness based on what he wrote. I will be emailing him to see if there are any additional details regarding this, or other, sightings. I appreciate his taking the time to write out his account.