I took a trip to Liberty County in Southeast Texas last Saturday to meet with a gentleman who claims to have seen a sasquatch just off a farm to market road outside of Dayton. Fellow TBRC member and veteran investigator Daryl Colyer accompanied me on this trip. Below is my write-up on this incident:

This interview was conducted as a result of an alleged sighting of a large upright biped that matches the description of a sasquatch in Liberty County, Texas in February of 2010. 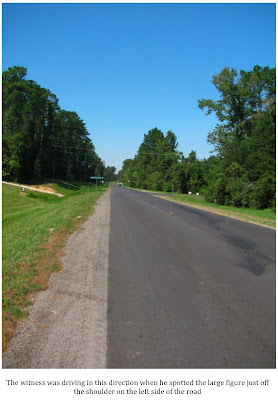 The witness was driving home from a meeting in Kennefick on FM 1008 at approximately 9:30pm. The witness rounded a slight curve in the road and spotted a large upright figure standing just off the shoulder on the opposite side of the road. The witness caught a brief glimpse of the figure as he passed at 50-55 mph. The witness, wanting to get a second look, stopped and turned his truck around at the first opportunity. When he arrived back at the sighting location the figure was gone. The witness then grabbed a flashlight, which he keeps in his truck at all times, and stepped out of his vehicle to see if he could spot the figure. He reported that he was shaking and was more than a bit unnerved by what he had seen so he didn't venture past the shoulder of the road to look. He did not manage to spot the figure again. 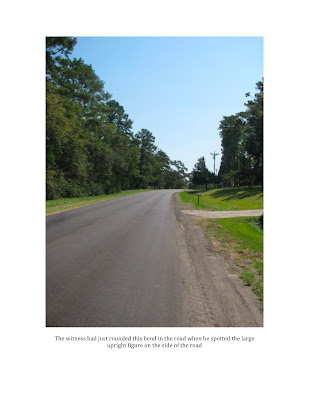 The sighting lasted only a few seconds but the witness claims to have been only 20-30 feet away and got an overall impression of the size of the figure. He initially described the individual as very broad and 6-6 1/2 feet tall. He was not able to discern color and could only say it was dark. The witness said it was almost like seeing a silhouette. The witness discerned no eye-shine but did have the impression the figure was facing his oncoming vehicle. The witness did not hear or smell anything unusual at the time of the sighting or after returning to the site upon turning around. The side of the road where the figure was seen is a privately owned piece of property with a residence on it. When asked if the figure could have been a person, possibly the property owner, the witness said firmly, "There is no way it was a person." 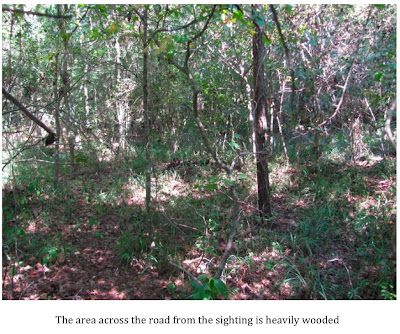 Fellow TBRC member Daryl Colyer and I visited the witness and the sighting location on Saturday October 2. We met and interviewed the witness again at that time (the initial interview was done over the phone). We were also able to meet one of the owners of the property where the sighting took place. She confirmed that back in February the witness had asked her whether her family had spotted any unusual animals on the property. The property owner said that the witness was told a large cat had been seen. She said the witness then asked about anything "sort of like a primate." The witness then shared the story of his encounter with the property owners. It should be noted at this time that the property is surrounded by forest. The opposite side of the road is heavily forested as well. The property also features a small lake/pond that lays right off the road and would have been directly behind the location where the figure was spotted. 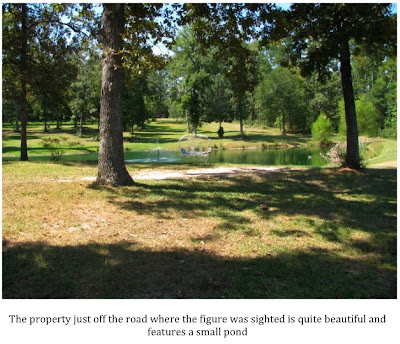 The couple who own the property where the incident took place know the witness and are split in their opinion of what happened that night. The husband, who was at work when we visited and whom we did not meet, is skeptical and feels the witness likely misidentified a person or an animal of some kind. The wife was present during our entire investigation and believes the witness may have indeed spotted a sasquatch. It is important to note that neither of them feels the witness is lying or perpetrating a hoax. 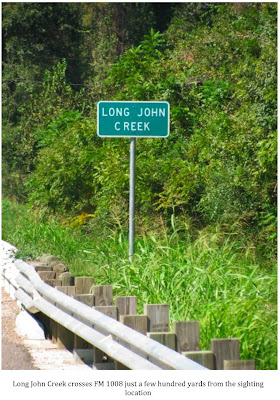 Colyer and I both reached the conclusion that the witness saw something for which he could not account. The description given of an upright large biped seems to rule out known animals that inhabit the area. It would also seem logical to assume if it had been a person walking along the road they would have still been present when the witness turned around and returned to the spot where the figure was seen. In addition, a re-enactment of the sighting seems to indicate that the figure's size would preclude it from being a human. We had the witness stand in the road in the approximate spot from which he saw the figure. Investigator Colyer, who stands right at 6 feet tall, stood in the approximate spot where the figure was located. The witness stated that the figure was far taller and wider than Colyer. Investigator Colyer then raised his arm over his head and the witness agreed the figure stood at a height approximating that of his upraised hand. This would make the figure at least 7 feet tall. In addition to the re-enactment, we were able to see that there are no trees, structures, etc. in the area that the witness could have misidentified. 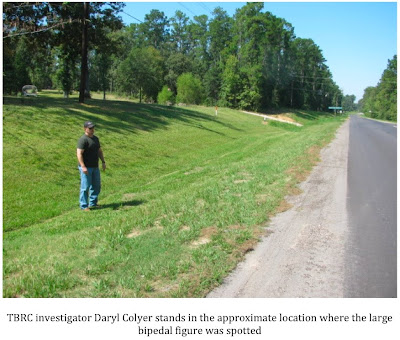 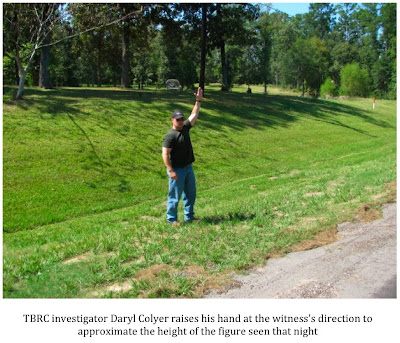 The official report will be posted on the TBRC website shortly. It will include additional photos from my trip and aerial photos of the area taken by TBRC member Ken Stewart. As always, an interactive map of the area in question will also be included. If you haven't visited the TBRC site I would invite you to do so. It is extremely cool, user friendly, and has a very large database of sightings that you can browse through.
Posted by Mike at 8:38 PM