I received an email from a reader a day or two ago that included a couple of awesome photos. Check out the email and the photos below.

Attached are 2 pictures I took from my apartment balcony in Plano Texas in Apr 2010. My balcony overlooks the Arbor Hills Nature Preserve. My wife and I were sitting outside enjoying the end of the day when we noticed that several crows were very excited about something not too far away from us. As luck would have it, this young bobcat scrambled up the tree apparently trying to escape the crows. He ended up directly in from of our second-story view. I hurried back into the apartment to grab a camera and took several pictures, the best two of which I attached here. The cat remained "treed" for about 20-25 minutes until the crows moved on to something else. You can see that the cat was close enough to capture the light from my camera's flash.

I came across your blog tonight concerning the large black cat in Plano and I have it admit, I am skeptical. I did however, want to assure you that the bobcat population in Plano is alive and well around here. I jog the park frequently and have ran into several others that have seen the cats in the park. I work at Presbyterian Hospital of Plano which is just one mile away & we frequently see bobcats behind the hospital & have even seen a mother with kittens.!!! 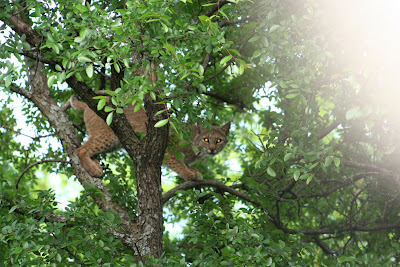 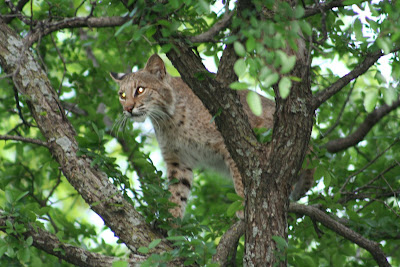 These terrific photos of a young bobcat go to show that big cats can and do make the Metroplex area their home. Certainly there is a big difference between a population of bobcats and a population of cougars. Keep in mind, however, that if there are enough resources to support these bobcats it is not unreasonable to assume that a small population of larger cats could make a living in the area as well. The reader who sent me these photos remains skeptical of panther sightings and that is ok. Skepticism is not a bad thing. There is a world of difference between being skeptical and being closed-minded. I, myself, am a big believer in the "where there is smoke there is fire" way of thinking. Big cats continue to be reported in this area. While some people are, no doubt, misidentifying bobcats as panthers, the reports of cats with tails almost as long as their bodies, some being jet black in color, don't jibe with the theory that everyone is seeing bobcats.

The Plano area continues to be a real hot spot for big cat sightings. Bobcats, cougars, and black panthers continue to be reported on a fairly regular basis. I have a backlog of reports that I need to put up on the site regarding these sightings. Please keep me informed if you happen to see a big cat of any kind in an area where they officially do not exist.