I have been hearing tales of alligators haunting Central Texas reservoirs, creeks, and rivers since I arrived in the area, way back in 1987. In particular, Stillhouse Hollow Reservoir and Lake Belton were said to be habitats for these big reptiles. I never really believed these stories were true. I grew up in Southeast Texas where gators are plentiful and just didn't feel like the habitat was suitable for alligators in my new home territory. I have fished Belton and Stillhouse now extensively for over a decade and have never seen any sign of alligators in either body of water. I have also fished the Lampasas, Leon, and Little Rivers, Nolan and Salado Creeks, and numerous privately owned stock tanks and lakes without ever seeing anything that would lead me to believe that alligators were present in the area. That all changed last April when a gentleman named Eric Dominowski spotted, and photographed, a big gator on the banks of the Lampasas River. You can read about that sighting here. This incident inspired me to dig a little deeper and see if I could find any other source that documented gators in the Central Texas region. It took a while but I did find something. 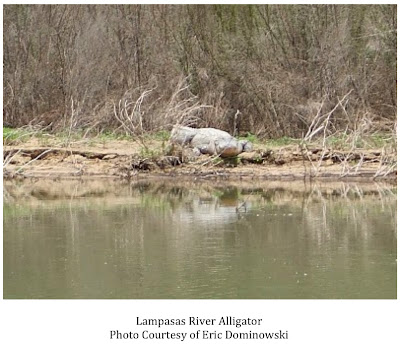 An article on the Wildlife News and Habitat Management site documents an incident where an 8-foot long alligator was killed by law enforcement officers back in June of 2007. The article can be accessed here but I will attempt to summarize it for you below.

An approximately 8-foot long alligator was spotted lying near the intersection of FM 436 and FM 1123, roughly a mile from the Lampasas River, about 2:20am by a traveler who called it in to the Bell County Sheriff's Department. The big gator weighed in at about 200 lbs. and wasn't too thrilled to see local law enforcement personnel upon their arrival. Sheriff's Deputies contacted Texas Parks & Wildlife personnel and were advised to capture the gator, if possible, but to shoot it if it became aggressive. As you can probably imagine, Bell County Deputy Sheriff's don't exactly get a lot of experience in wrangling alligators and failed in their attempts to subdue the big reptile. They did succeed in making it angry; however, and felt it was best to shoot the gator in the interest of public safety."It was a safety issue," Bell County Sheriff's spokesman Jimmy Lewing said. 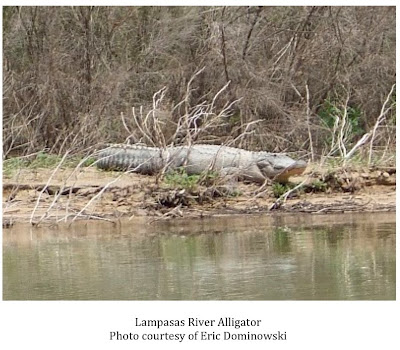 Since the gator was found on a state maintained highway, the Texas Department of Transportation was called to dispatch maintenance workers to the scene to remove the animal. The article quotes Ken Roberts, TxDOT spokesman, as saying, "We picked it up, hauled it away, and buried it." He added, "We pick up deer, cows, horses, and dogs...that's what we do." Roberts did admit picking up a road-killed alligator was pretty unusual. "It's probably the strangest thing we've picked up in a long time," he said. Interestingly, the maintenance workers who were actually dispatched to the scene weren't surprised at all. "They said there's gators in the streams and rivers," said Roberts.

According to the article, Derrick Wolter, a Texas Parks & Wildlife biologist agrees with the assessment of the TxDOT maintenance workers. He said that there have long been reports of alligators swimming in the waters of Stillhouse Hollow Reservoir and Lake Belton. "I don't know if they are illegal pets that someone let loose or if they are naturally occurring," he said. Wolter guessed the gator was a male looking for a mate due to the time of year. Alligator breeding season usually occurs in May but can certainly extend into June. Since the gator was disposed of before it's gender could be determined this remains conjecture. 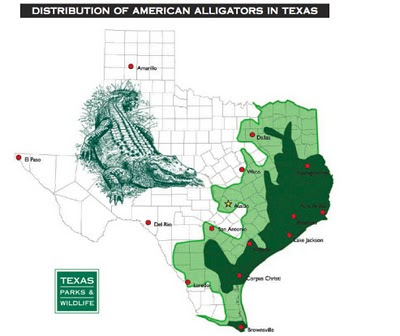 As you can see from the graphic above, the Central Texas area, which includes Stillhouse Hollow Reservoir and Lake Belton, is on the extreme Western edge of recognized alligator habitat. This being the case, maybe we should not be surprised that these big predators are present in the area. While their numbers are, no doubt, much lower in Central Texas than points farther East, the photos snapped by Eric Dominowksi prove they are present in the area.

I would ask any readers who have had an encounter with an alligator anywhere West of I-45 to let me know. I would like to hear your story. Oh, and, as always, keep those cameras handy at all times.
Posted by Mike at 7:28 PM

Email ThisBlogThis!Share to TwitterShare to FacebookShare to Pinterest
Labels: Alligators, Out Of Place Animals