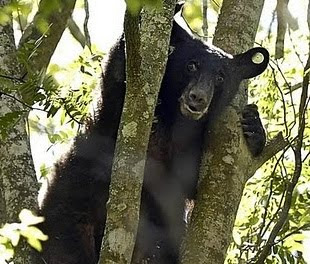 There is a fine article on the website of The Grapeland Messenger about the return of black bears to East Texas. The piece, written by Dana Goolsby, can be accessed here.

Goolsby's article touches on several aspects of the return to the Piney Woods of the black bear. One of the first things Ms. Goolsby does is advise hunters to not be too quick to fire their weapons at what they assume to be a feral hog. This would be especially true in the low light conditions of dawn and/or dusk. As is correctly pointed out, bears and hogs have very similar shapes and sizes. Many think of bears as being much larger than hogs. This is simply not the case. Most East Texans are going to be seeing Louisiana black bears. These bears rarely exceed 300 lbs. As many hog hunters can tell you, feral hogs can and do get this large. The Texas Parks & Wildlife Department realizes misidentification could be a problem and has posted signs (see pic below) in the Davy Crockett National Forest reminding hunters to take extra care when identifying their target. Goolsby also point out that shooting a protected black bear could result in a fine of up to $10,000, the loss of hunting privileges, and/or jail time. If you are going to shoot a bear in Texas you had better be able to show you felt you were in grave danger. 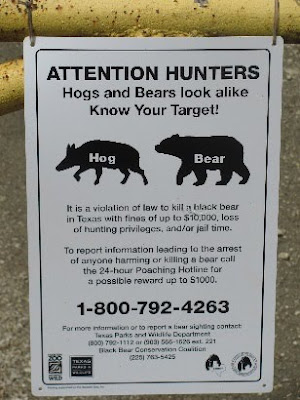 Goolsby also addresses whether or not East Texas is suitable habitat for black bears. She correctly points out that it indeed is a great place for bears to live. The Davy Crockett National Forest is situated in East Texas within the Trinity and Neches River basins. The forest encompasses over 160,000 acres in two counties. Add the 150,000+ acres in the Angelina National Forest, the 160,000+ acres in the Sabine National Forest, the 163,000+ acres in the Sam Houston National Forest, and the 97,000+ acres within the units of the Big Thicket National Preserve and you have more than 580,000 acres of prime bear habitat in the Lone Star State. Add to that acreage the vast amount of undeveloped and heavily wooded private land in East Texas and you have a virtual bear paradise. In fact, Texas once had an enormous black bear population until they were hunted out in the early 1900s. The bears are simply rebounding to a point where they are filling in the ecological niche they once occupied in Texas.

From time to time in the past, credible bear sightings have trickled in from East Texas. It was assumed that the majority of these bears were young males looking for mates and territory of their own that crossed the Sabine River from Louisiana. In far Northeast Texas it was thought to be boar bears from Arkansas and Oklahoma - both states have very healthy bear populations - that were venturing into Texas. More and more; however, sows with cubs are being reported. Just this week a friend of mine who lives in Upshur County in East Texas reported that an acquaintance of his had spotted a female black bear with cubs on her property (I hope to have some more on this soon). Are these sow bears the exception rather than the rule? Only time will tell but if females begin to take permanent residence in Texas forests the bear population could rebound quickly. That is, as long as the bears remain protected.

Goolsby gives also give some historical perspective on what led to the extirpation of the black bear in Texas. In particular, the black bear hunters of the Big Thicket are singled out (I plan on doing a post on them in the future). She also gives the standard good advice on what to do should you encounter a black bear in the wild. Her advice is something we've all probably heard before but it is a good to be reminded. Black bear have managed to survive and even thrive in areas where their larger cousin, the grizzly bear, has been hunted out. They have managed to survive because they are generally shy and retiring around people. They, as a whole, prefer to climb a tree or run away rather than fight. This instinct has served them well. Keep in mind; however, that they are powerful and potentially dangerous animals not to be trifled with. As Goolsby states in the article, you should never run from a bear. Running tends to trigger any predator's instinct to chase. It automatically puts you in the "prey" category. Back away slowly and never turn your back to the bear.

Bears aren't only being spotted in East Texas. The video below comes from a ranch near Leakey, Texas which is about 50-60 miles Northwest of San Antonio. The animal in this video is likely a bear that has travelled up from Northern Mexico or East from the Big Bend region of the state. Regardless of where the bear came from it's presence makes the case that bears are re-establishing a viable population in the Lone Star State.

There is little doubt that bears are returning to Texas. I think this is a great thing. There will, no doubt, be some times when humans and bears come into contact with each other but if common sense is exercised incidents that turn out badly should be able to be kept to a minimum.

I would recommend that all you deer hunters pack a camera as well as your gun this fall. In this state there is just no telling what you might get the chance to snap. Black bear, cougars, black panthers, etc. all might wander by your stand. Who knows something even more spectacular, and taller, might make an appearance as well. If any of you hunters captures anything interesting I would love to see the photos. I might be able to recommend what your next step should be if you do manage to document something rare.
Posted by Mike at 10:46 PM