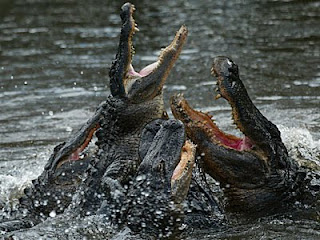 Below is some fascinating video of hundreds of alligators engaging in what has been described as a feeding frenzy.

The amazing video was shot by fisherman Ray Cason at Stephen C. Foster State Park in Georgia's Okefenokee National Wildlife Refuge. The gators were congregated in a boat basin, or canal, which leads from a boat ramp to Billy's Lake.

"There were 10-foot gators with their entire bodies three feet above the water. Gators rolling all over themselves. It was foggy that first morning (Saturday, July 10) but I bet there were 300 gators I saw in that boat basin and canal," said Cason.

Wildlife biologists seem to be split on whether true cooperative feeding was taking place. Cooperative feeding implies that the alligators were working together in some fashion to round up and capture prey. This behavior is seen with other animals like wolves, lions, and even whales. Other experts believe that there was simply a lot of prey, mainly bowfin, gathered in the boat basin each of those two mornings. A congregation of prey that thick was bound to attract a lot of attention from the dominant predator in that ecosystem.

Whatever the case, there were a whole lot of alligators going at it in a very tight space. I grew up in SE Texas where there is a very healthy alligator population but I have never seen anything like this. I do know that trying to navigate that writhing reptilian mass in a small aluminum jon boat would be pretty nerve wracking. It is not something I would recommend. 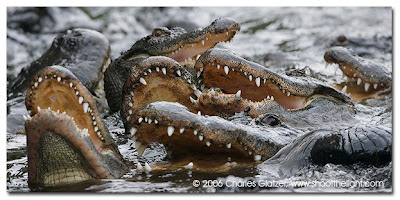 The Okefenokee is very similar to some of the marshy/swampy areas of SE Texas and Louisiana. I would be very interested in hearing from anyone who has observed this sort of behavior in our neck of the woods.
Posted by Mike at 2:36 PM