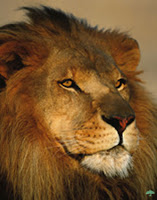 According to Shreveport based television news affiliate KSLA, authorities in and around Marshall, Texas are on the hunt for an African lion. You can check out the story here.

The Marshall Police Department began receiving phone calls regarding sightings of the big cat last Thursday morning. Several locals reported spotting the lion, estimated to weigh in the neighborhood of 300 lbs., near a train depot in the vicinity of North Washington.

According to Marshall residents, the police are taking the reports very seriously. Local resident Shawn Hagerty was quoted as saying, "They were telling us to stay close to the building, stay indoors because that possible threat really is there."

According to some other residents, police have been spotted carrying high-powered rifles in case the lion had to be taken down.

Not everyone, however, is buying the story that an African lion is on the loose in northeast Texas. The story on the KSLA site says "wildlife experts", who are not named, are saying the cat seen was most likely a large bobcat or a cougar. Also, no one has reported "losing" an African lion

Personally, I find the bobcat theory completely ludicrous. I just don't see how anyone could mistake a bobcat for a 300 lb. lion. I suppose the cougar explanation could turn out to be correct. I could see, despite the difference in mass, how a grown cougar could be mistaken for an African lioness (see comparison below). What is not clear from the KSLA post is whether the lion reported has a mane or not. If the cat spotted was a maned male then the cougar explanation just doesn't fly either. 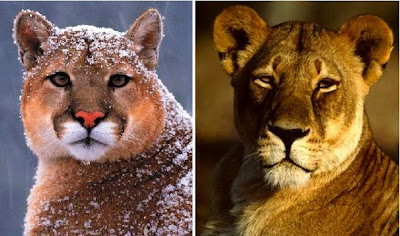 If anyone manages to catch a glimpse of this lion or get a picture I would be very interested to hear about it.
Posted by Mike at 5:58 PM