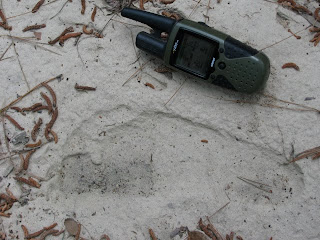 I know many of you are waiting on an update on the possible sasquatch tracks that I and fellow TBRC member Daryl Colyer located in SE Texas last Mother's Day weekend. I don't have much to add just yet but thought I would update you on what little I do know.

The best track, pictured above, was studied closely at the site by myself and Daryl Colyer. The track was cast the next day by TBRC member Brad McAndrews. Brad has been in the possession of the cast since. What Daryl and I observed at the site was very compelling, however. The track appears to have been made by an extremely flat-footed individual. There is no sign of an arch at all. The track was uniform in depth from toes to heel. There was no evidence of the heel striking the ground first then rocking to the ball of the foot and toes for push off. The uniform depth of the track suggests the possibility of an individual exhibiting a compliant gait. In other words, the individual picks their foot up almost vertically, strides, and sets it down in a flat- footed manner. The entire foot contacts the ground, assuming it is relatively level, at the same time. This is the gait exhibited by the individual in the Patterson-Gimlin footage. This odd gait has been reported by some witnesses claiming to have observed a sasquatch in motion. Several other track finds have shown evidence of this same compliant gait.

The track maker also seems to have had an enormous big toe. The possibility that some sort of sliding or slippage occurred thus making the big toe appear abnormally large was considered. However, there is absolutely no sign of this sort of sliding anywhere else in the track. The other four toes are imprinted perfectly and look like peas in a pod. The rest of the track, likewise, shows no signs of sliding so this was ruled out as the reason the big toe appeared so large. The big toe also exhibited a slight divergence from the rest of the toes. The gap between the big toe and the second toe was not huge, about a quarter of an inch, but it is noticeable. This divergence is not nearly as great as you would see in a gorilla or chimpanzee foot but is more than you would see in a normal human foot. This flexible big toe is something that has been speculated about based on other track finds around the country. 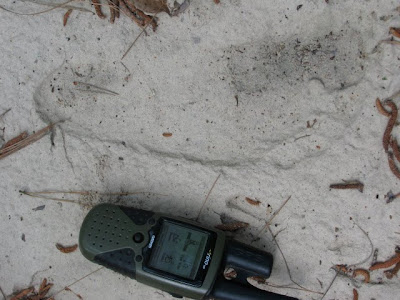 We were not able to observe any evidence of a mid-tarsal break as is commonly reported in some alleged sasquatch tracks. However, the track is very similar in appearance to tracks left by the individual in the Patterson-Gimlin film at Bluff Creek in 1967. Some of the tracks left at the sight seemed to exhibit this feature. Other tracks simply appeared extremely flat-footed. The photo below shows a comparison between a casting made from the Bluff Creek site and a photo of the SE Texas track we located. They appear very similar. 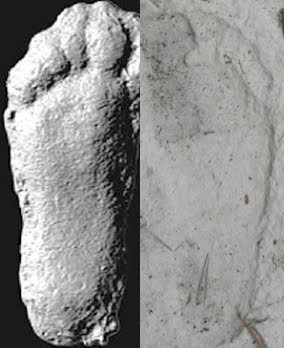 There is no doubt the tracks were made by a bipedal individual and are humanoid in form. However, "humanoid" does not necessarily mean "human." At least not in the way we typically think of human. Daryl Colyer has astutely pointed out that the track shares some similarities to the famous Laetoli tracks, which were created by a bipedal individual some 3.6 million years ago in Tanzania. The track maker was likely Australopithecus afarensis. The tracks are strikingly similar in form to the modern human foot but do exhibit some subtle differences. The diagram below illustrates the difference in how the Laetoli track (on the left) maker's foot struck the ground while ambulating compared to how a typical modern Homo sapien's foot (on the right) contacts the ground during walking. The darker the area on the diagram, the deeper the impact left in the track. You can also note the difference in the arches between the two species and the slightly divergent big toe in the Laetoli track. At least preliminarily, the SE Texas track seems to have more in common with the Laetoli track maker than it does with modern humans. 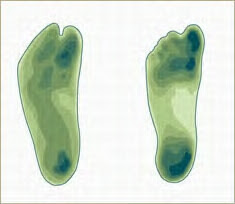 Now, let's go back to the flat-footedness of the SE Texas track maker. Pes planus, the condition causing flat feet or fallen arches, while not exceedingly rare, is not common in humans. Estimates on just how many people suffer from this condition vary but let's err on the high side and say 20% of the population suffers from Pes planus. That would mean someone suffering from fallen arches was walking barefoot down a debris strewn creek bed. Also, don't forget that a second individual, who left smaller tracks with the same flat-footed characteristics, was also present in that creek. Statistics would seem to suggest this is unlikely. One other thing to consider is that flat-footed people generally are not hikers. This condition was, at one time, considered a serious enough hindrance to marching that it was cause to be denied entry into the military. I would guess that anyone with this level of flat-footedness would likely not find hiking particularly enjoyable. This individual would likely be wearing orthotic devices in each boot/shoe if they did decide to go for a walk. To think a person with fallen arches would go for a hike over a mile from any trail or road, take off their boots/shoes, which would likely contain their orthotics, then walk down a creek bed littered with pinecones, sweet gum balls, rocks , and sticks while dragging along a second individual suffering from the same condition begins to stretch the boundaries of credibility in my mind. In addition to this unlikely scenario, the track shows no sign of an increased angle of the big toe (hallux) inward, which is commonly associated with Pes planus.

So, based on all of this, can I totally rule out a human as the track maker? The answer, obviously, is no. I do feel it is unlikely, however. No one piece of this whole puzzle proves anything. Like much that has to do with the sasquatch enigma, it is the totality of the evidence and circumstances that needs to be considered. When you put it all together it is extremely compelling. The biggest problem most seem to have with the track is the size. Since it is only 11-12 inches in length, the track falls well within the human size range. This being the case, some simply don't believe it could be anything else except a human foot print. If all the oddities of the track were present in a print that was 16-17 inches long there would be no discussion whatsoever.

Having said all of that, I want to reiterate that I still have not been able to get a look at the casting. My opinions are based solely on my observations at the site and on the many photos I took of the track. Brad McAndrews, who is in possession of the casting, has a job requiring that he be on the road traveling quite a bit. He and I have not been able to find a day where we were both available to meet halfway between my home in Central Texas and his home in the Houston area. This highlights one of the difficulties with this whole endeavor (attempting to document the sasquatch). Those who are pursuing this animal are only able to get out in the field sporadically. Family and employment responsibilities take precedence and often interfere with efforts to get out in the field. This is the very reason that I was not able to cast this track myself. It was Mother's Day weekend and I wanted to be home on Sunday to be with my wife and children. As soon as I am able to meet up with Brad and get the casting I will update the site with photos and any new observations.

Email ThisBlogThis!Share to TwitterShare to FacebookShare to Pinterest
Labels: Bigfoot