An Amazing Reunion in West Africa 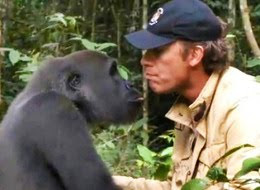 I recently came across an article, written by Helena Sung, on the Paw Nation website that documented an extraordinary, and touching, reunion between a lowland gorilla and the man who raised him from infancy. You can read Ms. Sung's full article here.

Kwibi, a western lowland gorilla, was born in captivity at the Howletts Wild Animal Park in England. British naturalist Damian Aspinall, in conjunction with the foundation bearing his name, raised the gorilla from infancy with the intention of re-introducing him into the wild. After several years of parenting by Aspinall, Kwibi was released into the wilds of Gabon, West Africa.

Five years after releasing the young gorilla, Aspinall decided to attempt to visit his old friend. He traveled to Gabon hoping to catch a glimpse of Kwibi. Cameras rolled as Aspinall called, "C'mon! C'mon," while floating down a river in the area where it was thought Kwibi was living. What happened next was truly astounding. You can view the footage below.

"He heard my voice and came to the edge of the river," Aspinall said.

Aspinall cautiously approached the gorilla he had not seen for years. Initially, he was a bit unsure how Kwibi would react to him after all this time. Aspinall realized all was well when he heard the gorilla emit what he called a "love rumble". Kwibi nuzzled his former "parent" and wrapped his arms around him in a gentle bear hug. It was clear that Kwibi did not want his long lost friend to leave again.

Eventually, Aspinall did have to board his boat and continue his journey down the river. However, Kwibi followed his progress from the riverbank. Eventually, the boat anchored up for the night. The gorilla stayed in close proximity on the opposite bank.

"He hooted, calling for his friend," according to Aspinall, all night. The next morning Aspinall took a swim in the river. Sure enough, Kwibi appeared from the bush on the opposite bank.

"It is no different if you go see a friend in another country and you meet and you have a reunion then go on to your separate lives again," Aspinall said to Matt Lauer on the Today show. "I always feel I'll see him again."

I hope you will take the time to view the video. To read about the encounter is one thing but to see it as it unfolded is something all together different.

Clearly there is so much more than we ever thought to the great apes. Their intellectual capacity, memory, and emotional depth are stunning. This reunion, thankfully documented, is something truly special. How anyone could not be affected by viewing it is beyond me.

Aspinall concluded his Today show interview by saying, "I hope when people see this they realize animals deserve their chance..."