Tool Use by Gorillas Documented

Two separate pieces of video shot by scientists involved in a long term study of gorillas in the Congo show that these great apes, like several of their cousins, have the ability to problem solve at a high level and create tools to help them cope with environmental challenges. The video can be viewed below. You will have to sit through a short commercial featuring an undocumented species of talking gecko but it is well worth the wait.

The importance of this individual discovery is explained well enough in the video so I will not rehash that here. I would like to stress, however, that this discovery should, once again, remind us not to underestimate the intelligence of the great apes. Time and again over the last few years new behaviors have been observed in chimps, bonobos, orangutans, and gorillas. Behaviors never before seen by scientists. Behaviors that may have been reported periodically by native peoples but dismissed as folklore by mainstream researchers. Fishing, swimming, hunting, whistling, hand clapping, and the ability to understand, at least on a rudimentary level, the future and make plans for it have all been observed in the great apes. Also, evidence has been uncovered showing the very real possibility that the building blocks of language may exist in wild orangutans.

Those who research the documented great apes and those who seek apes of the undocumented kind should all take heed. Reports of behaviors that may seem outlandish because they have never been observed before should not be dismissed out of hand as myth. 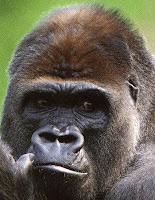 An open mind is critical to any scientific endeavor. A good scientist does not dismiss evidence that does not fit his/her preconceived notions. Instead, a good scientist goes where the evidence leads. Evidence that doesn't seem to fit what is known about a documented species shouldn't be automatically discarded. It should be catalogued and held onto. Future discoveries may prove that the unusual data is more than just an anomaly. If every researcher automatically assumes any unusual data they collect is tainted or an anomaly and discards it we may miss out on something important. The scenario where multiple researchers in different locations make the same unusual discovery, decide it is tainted or a fluke, and then toss the data is a real one to me. If researchers would publish their data, even the seemingly anomalous findings, they might find that others who could confirm their findings.

I want to stress that I'm not talking about grand conspiracy theories to suppress unusual discoveries in regard to great ape behavior or the existence of undocumented apes. I don't think any such conspiracy exists. Certainly one anomalous piece of evidence should not be enough to change the way we view a species. I'm just asking that the anomalous evidence not be forgotten or discarded since it doesn't seem to fit our view of things. That way, if the same, seemingly anomalous, evidence is observed again at a later date, or by a different researcher, it can be reconsidered. Once something is observed multiple times a case can begin to be built that the current view of things might need to be altered.

On different note, I locked onto what gorilla researcher Emma Stokes said at the end of the video. To paraphrase, she said that this discovery shows the benefits of long-term observation projects. Such projects have yielded mountains of data on many species across the globe. It has long been my opinion, and I'm not alone in this, that a well-funded long-term observation project could very well be the way the sasquatch is finally officially documented. I have at least one well-qualified friend, and fellow TBRC member, who has stated publicly that he would gladly give up his day job and live in a remote observation post for months at a time if a donor would step up and match his annual salary.

Hopefully, such funding will become available in the future.
Posted by Mike at 10:23 PM