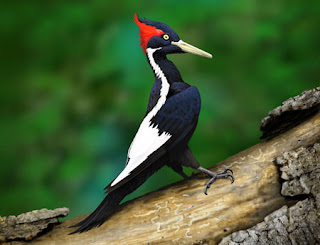 Ron Rohrbaugh, director of the Cornell Lab, said, "The preliminary conclusion we've come up with at this point is that it's unlikely that there are recoverable populations of Ivory-billed Woodpeckers in those places that have received significant search efforts over the past five years." Despite sighting reports and extensive searches in the Black Swamp of Arkansas no definitive evidence of the elusive woodpecker's existence has been found.

The searches were prompted by a video shot by David Luneau that, while a bit grainy, appeared to show a living IBW in flight. I have heard from a reliable source that most at Cornell believe the film does indeed show an Ivory-billed Woodpecker. I think this belief may be reflected in how Rohrbaugh worded his statement. He said that it was not likely there were "recoverable populations of Ivory-billed Woodpeckers." He did not say he believed the birds to be completely extinct or that the Luneau video did not show a living IBW. To the contrary, Rohrbaugh and his Cornell associates must have believed the film showed a genuine IBW to have spent so much time and money in its pursuit.

Personally, I believe the Ivory-billed Woodpecker is still out there. Whether there are enough birds left to successfully keep the species alive for ten or twenty more years I cannot say. However, if even one breeding pair is left there is hope.