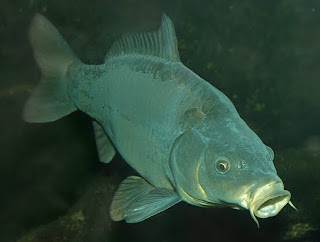 A recent April Fool's joke seems to have taken on a life of its own here in Central Texas. The story of a giant carp, dubbed "Carpie", inhabiting Lady Bird Lake (formerly known as Town Lake) in Austin, Texas was put out by local television station News Channel 8 on April 1 of this year. It is symbolic that the station chose a fish story for their April Fool's Day prank as it seems many have swallowed it hook, line, and sinker. The tale has continued to thrive and I've actually received two emails from readers asking if I knew anything about this fish. So, catch yourself up by viewing the original news broadcast of the "story" here.

A YouTube video, embedded below, features several people, including Austin's Mayor Lee Leffingham, who claim to have seen the enormous carp prowling the shoreline of Lady Bird Lake. This video, in conjunction with the News Channel 8 "report", had many monster carp hunters mobilizing for a move on Lady Bird Lake.

I have to hand it to News Channel 8. The hoax was a good one. It was depicted in a real enough fashion to fool a lot of folks yet tongue in cheek enough to be seen through by most with any outdoor experience. Also, the prank did not seek to make fun of anyone. So, I have no problem with it. Other than a few red faces there was no harm done.

It should be noted that Lady Bird Lake has a reputation as being one of the best 2-3 spots in the country to land big carp. As a matter of fact the Texas state record carp, weighing in at a monstrous 43 lb. 12 oz., was hauled out of Lady Bird Lake by a gentleman named K.C. Crawford. Lobbying efforts are underway by several carp fishing groups to tag Lady Bird Lake as a trophy fishery for carp. This would ensure a catch and release only policy on this species in the lake. 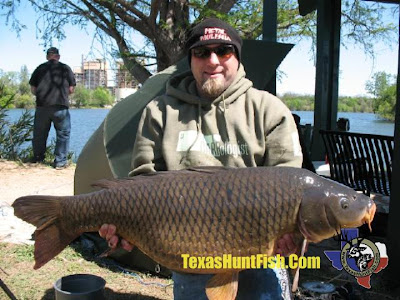 Lady Bird Lake's reputation as a big carp fishery, no doubt, played a part in some folks buying into the April Fool's joke. So, if you got fooled just shrug it off and have a good laugh. They gotcha this time but, rest assured, there is no 15 ft. long monster carp lurking in Lady Bird Lake....