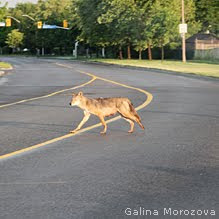 A coyote was captured in a parking garage in New York City this week. It seems this particular coyote had managed to elude New York City Police for two days after first being sighted near the Holland Tunnel. Officials managed to chase the coyote into an open-air garage in Tribeca. Officers then tranquilized the coyote and carried it off to the local A.S.P.C.A. where it will be observed before, eventually, being released in a more rural location. You can read the story and watch a video documenting the capture at the website of the Huffington Post here.

According to the article, this is the fourth coyote sighted in Manhattan this year. Seeing as we are only three months into 2010, four sightings is a significant number. The whole episode is very reminiscent of the story that came out of Houston, Texas earlier this month that documented the capture of a bobcat in the downtown area. The bobcat was also tranquilized and captured in a parking garage.

This story gives me one more reason to stay out of those parking garages. I've spent some lonesome nights in the woods, swamps, and mountains from Texas to Washington. None of them have given me the creeps like those multi-level parking garages do at night. But I digress... 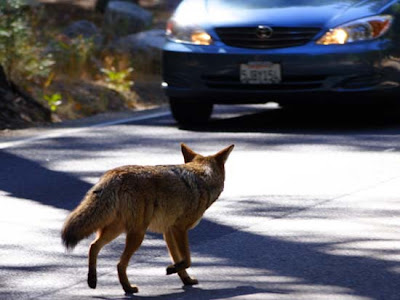 I take two things from this story. If coyotes are living in New York City then they are going to be able to live in any major metropolitan area. As stated here before, I continue to believe that other predators, including big cats like cougars and bobcats, are adapting to life in urban areas as well.

If I'm correct, and this trend continues, animal control officers in cities around the country are going to become known as more than just dog catchers.
Posted by Mike at 11:51 AM