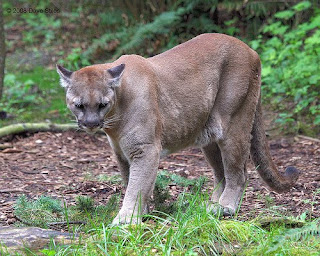 It seems another cougar may be stalking the woods in East Texas. A report posted on the website of Tyler based television station KLTV details the experiences of farmer Chuck Arena. You can access the story here on the KLTV website. The community of Ben Wheeler is located in Van Zandt County approximately 60 miles southeast of Dallas.

It seems that Texas Parks & Wildlife officials are begrudgingly beginning to admit to the presence of a wild population of cougars in East Texas. Game Warden Chris Green is quoted in the piece as saying, "I think we're seeing more and more...We didn't use to hear about so many sightings of these big cats but we have in the last five years."

One thing I did find interesting was the matter of fact tone Mr. Arenas and his neighbor seemed to take when discussing the sightings of cougars in the area. Folks living in the rural portions of East Texas will tell you that the big cats have always been there. Most sightings are not reported because the people in these areas don't think of them as anything too unusual.

Also of interest in the article was the fact the reporter, Courtney Lane, tossed in a tongue-in-cheek reference to bigfoot. Lane wrote, "At least Arena doesn't have a bigfoot on his hands." How the subject of bigfoot was raised with Mr. Arena is not clear. All that is printed is his response, "Bigfoot is up by Caddo Lake...that is where they've sighted those." I thought the inclusion of that statement was an obvious jab at bigfoot reports in East Texas. I felt it also, and this may have been unintentional, served to cast doubt on the cougar sighting being investigated. Again, how the subject was actually broached with Mr. Arena is not clear. I suspect he did not appreciate it but that is only speculation. Interestingly, his reply hints that the possibility of the sasquatch being a real animal isn't so far-fetched in his mind. His answer simply mentions that bigfoot is usually spotted farther to the north and east than his place.

For a short article there was quite a bit of information I found intriguing.
Posted by Mike at 10:03 PM