The growing population of Burmese pythons in the Everglades of Florida has become a well-known issue to the general public. While other invasives, such as the Argentine tegu, the zebra mussel and the piranha-like pacu are all causing problems for native wildlife and eco-systems, nothing seems to grab a hold of the imagination of the public quite like the thought of a mammoth snake slithering about the swamps and marshes of the American South. 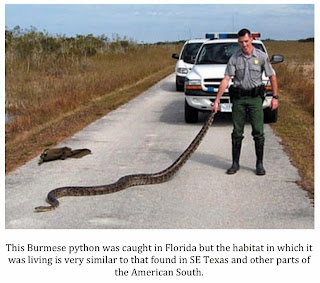 I’ve long feared that the issues with which Florida is currently dealing in regards to invasive snakes could become a problem for us in Texas. I did a post a while back in which I compared the annual precipitation amounts and average temperatures of the Everglades to those in SE Texas and found them similar enough to think that Burmese pythons, and other exotic reptiles, would do just fine here as well. You can read that post here.

While this “invasion” of large exotic snakes has not taken place yet, there have been a few stories that have made their way in to me. You can hit the “giant snakes” tag in the right-hand margin to read about a couple of them. Recently, another account came in via email from a reader detailing an experience he had with a giant snake as a child. As you can imagine, I cannot absolutely verify that the story he tells is true but I can tell you that this reader provided his full name and sent the story in via an email. Most people who provide accounts of this nature simply send them in anonymously in the form of a comment to an existing post making communication after the fact impossible. That is not the case here, so make of all of that what you will. I am withholding the name of the reader of my own volition. He has not asked me to do so.

Two young children, a boy 7 and a his older sister, 8, lived occasionally with their adopted “Grandparents” who lived in a wooded area on Taylor Lake near Seabrook, Texas. Their home, well out in the country off a gravel road in those days, the boy and his sister would dismount from the school bus and walk just a little over a quarter of a mile up a one lane oyster shell road leading to the little farm house overlooking the lake. 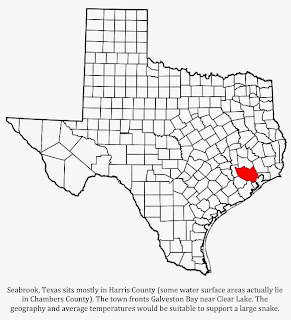 On one particular day, the two children decided to walk through the edge of the woods adjoining the shell road. They were approximately 30 feet or so from left side the road when they approached a downed tree in their path. It was then that they saw something that chilled their blood. They never saw the snake’s head for it had already crossed the length of the rather large fallen oak tree; but they saw the body, as big around as a man’s arm—or more—as it slithered along, and, looking to the shell road as a way of putting distance between them and the snake, the children saw the tip of the tail of the giant snake as it crossed the shell road quite a distance away, disappearing into the grass beside the road.

As fast as their little legs could carry them, they raced along the shell road to the farmhouse where their “Grandma” and “Grandpa” were sitting on the front veranda facing the lake—shelling purple hull peas. The children yelled at the old couple to “get the gun—we’ve just seen the biggest snake you ever saw. It must be 40 feet long or more.”

The old couple smiled knowingly at each other and told the children to go out and play in the back yard. Even the children’s parents, who happened to be there at the time, dismissed the report as childish imagination. It just could not be true—there could never be such a snake around Taylor Lake, or in Texas for that matter—or maybe in the whole world.

But the children knew it was true and not an exaggeration. For many years, as they grew into their seventies, they sometimes would look into each others eyes and ask, “Do you remember that snake?” The two are still alive today: my sister lives in Dallas—and I live in Houston only 28 miles from where we saw “the snake” sometime around 1947 or 1948. We could never convince even our closest family members and friends of what we saw that day.

We have thought about it for many, many years and concluded that, perhaps, a large Python or Anaconda must have escaped from the Houston zoo; or somehow an Anaconda from South America had made its way north. The following is a cut from an article I recently found on the internet:

This story is true and my sister and I will go to our graves declaring it to be so. 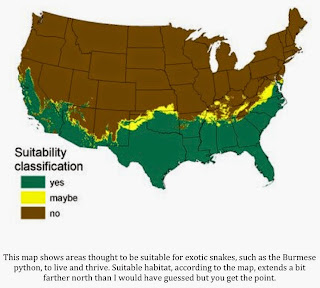 I suppose it is possible that this gentleman might be overestimating the overall length of the snake. Places and things we remember from our childhood often seem smaller than they did when we were little. Even if this is true, however, this still must have been a really big snake. Even if this gentleman has overestimated the length of the snake by fifty percent, that still leaves us with a serpent that is 20-feet or more in length. There is no snake native to North America that large. There are actually only a handful of snakes found anywhere in the world that approach 20-feet in length. The reader, himself, mentions two of them in his email: the anaconda and the python (several species of python can approach, or surpass, 20-feet in length). That being the case, we are almost assuredly dealing with an invasive animal. How in the world did it get to Seabrook, Texas? The date of the sighting, 1947 or 1948, predates the exotic pet trade that is causing so many problems today. Another possibility that crossed my mind is that it might have been a true “sea serpent” of some kind. Seabrook does, after all, sit right on Galveston Bay, which in turn, opens up to the Gulf of Mexico. This is an unlikely scenario to be sure, but you never know.

One other thought crossed my mind as well. What if this reader has not overestimated the length of the snake he saw at all? That is the stuff of which nightmares are made.

If anyone out there reading this has had a similar experience to that of this reader, please email it in to me. I would love to hear about it. It may also help me gauge whether or not we are seeing an increase in invasive species of snake in the Lone Star State.
Posted by Mike at 2:25 PM