Gorillas Use Odor to Communicate in the Wild

“The smell was just awful, like something had died.”

“That smell almost knocked me over. I swear I wanted to vomit.”

“It smelled sort of like a wet dog, but much worse; a very sour, pungent odor. Terrible.”

The quotes above all come from people who claim to have had a close encounter with a wood ape or sasquatch. Anyone with even a casual interest in the bigfoot phenomenon has heard about the terrible smell associated with these creatures. Terms like “sour” and “wet garbage” are often used to describe the overpowering odor. Yet, there are many other witnesses who claim the same types of encounters at close range that report having smelled nothing at all. Why would some of these animals emit a horribly foul odor while others would not?

It has long been known that gorillas have scent glands that emit a foul smelling odor whenever these great apes are under duress or excited. It has been posited by many that the sasquatch is likely a close relative of the known great apes, as it exhibits many classic behaviors that have been observed in these large primates. Bluff charges, chest beating, shaking trees and vegetation, snapping limbs off trees, rock throwing and other known great ape intimidation tactics have been reported by witnesses. Too, the most common description of the physical appearance of the North American wood ape correlates closely to the appearance of the known great apes. Hair-covered, colors ranging from black to reddish, extremely long arms, barrel-chested, extremely thick necks and sagittal crests are described on a regular basis. All that to say, it seems to be well established that the sasquatch exhibits many of the same behaviors and physical attributes of the known great apes. With that being the case, it doesn’t seem too much of a stretch to hypothesize that the North American wood ape may also share some of the same internal anatomical features as well. Scent glands may be one such feature. 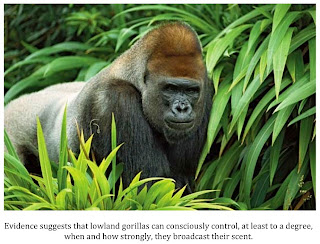 The mere presence of scent glands would not, however, explain why some wood apes, seemingly under duress, exude a putrid odor while others, in very similar circumstances, do not. It seems this is a question primate researchers have asked themselves in regard to gorillas as well. The results of a 12-month study conducted by the University of Stirling in Scotland may provide some answers.

Co-authors of the study, Phyllis Lee and Michelle Klailova, both psychologists at the University of Stirling, observed a male silverback lowland gorilla (Gorilla gorilla) named Makumba in his native habitat within the Central African Republic rainforest for one year and reached some interesting conclusions. First, gorillas can, and do, communicate with each other using scent. Second, the ability to emit scent is, at least partially, under the conscious control of the individual. Evidence suggests that Makumba could turn on or shut off his scent depending on circumstances.

It has long been known that gorillas communicate with several different types of vocalizations but they were not thought to communicate by projecting scents. There are numerous reasons for this assumption. Chief among these reasons is the size of the brain region dedicated for the sense of smell has shrunk during the course primate evolution. Also, primates lack a vomeronasal organ, a sensor that detects pheromones emitted by other animals. This combination of factors makes primates much more dependent on senses other than smell, most notably the sense of vision. Despite these facts, gorilla researchers such as Dian Fossey have long reported that each individual gorilla has a unique, and rather pungent, musky smell. It begged the question, if gorillas do not communicate by scent then why do they have these glands that emit such a strong odor? What was the purpose?

Lee and Klailova selected Makumba, a dominant male with an established harem and territory to study. The researchers observed the big silverback as he went about the business of tending to his females and fending off competitors. It was noted that Makumba broadcast his scent when he encountered other male gorillas that he may have seen as a potential threat.

“It was as if he was saying I am strong, powerful and here, protecting my females and babies,” Lee said.

This particular observation was not anything particularly new. It fit the model of a gorilla that was under duress, be it fear or anger, broadcasting his scent. What was potentially ground breaking was the fact that Makumba did not always broadcast his scent when other males encroached upon his territory, making it very possible that he was in conscious control of his scent glands. When other potentially threatening silverbacks came near, Makumba would abruptly shut off his scent.

“We think he was then trying not to tell the other male where and who he was,” said Lee.

Additional observations by the team seemed to back up the idea that Makumba was in control of when, and how strongly, he would broadcast his scent. According to Lee, Makumba’s scent would change depending on the situation.

“Makumba’s smell changed depending on the situation, such as whether the youngest baby was nearby or with its mother, whether his female harem mates were around and which stranger gorillas lurked about,” Lee said. 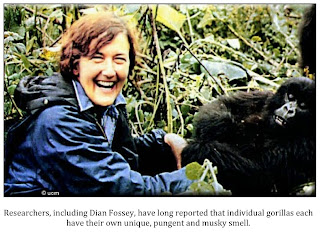 Indeed, it seemed the big silverback was able to directly influence the behaviors and activities of other gorillas by broadcasting his scent. It appeared to the researchers that Makumba was using odor as a modifiable form of social communication, where context-specific chemical signals directed the social behavior of other gorillas.

The fact that Makumba could so quickly turn this scent on and off in subtly different social contexts led the researchers to conclude that the ability to broadcast scent was, at least to some degree, under conscious control and not merely an automatic response to fear or arousal. It also strongly suggests that scent plays a far more important role in the lives of primates than originally thought. The authors of the study suggested this ability to communicate via scent may be especially useful in Central African forests, where limited visibility may necessitate increased reliance on other senses.

Mireya Mayor, a primatologist with the Centre ValBio at Stonybrook University in New York, who was not involved with the study, called the findings of Lee and Klailova “mind-boggling” due to the fact that primates rely so much less on their sense of smell than other animals.

“The most surprising part,” Mayor said, “is that they are able to suppress and consciously control scent.” She added, “But though it seems strange to imagine consciously dialing body odor up or down, humans can consciously control basic physiological processes such as heart rate, and humans are genetically quite close to gorillas.”

The question now is what, if anything, does this study have to do with the sasquatch?

As has been mentioned previously, many people claiming to have had encounters with North America’s great ape report a terrible odor in association with their sightings. When witnesses attempt to describe the smell, words like pungent, musky and sour are often used. Not coincidentally, in my opinion, these are the same descriptors used by gorilla researchers when they describe the odor broadcast by male silverbacks. Primatologist Mireya Mayor was right when she said that humans are genetically quite close to gorillas. Assuming the sasquatch is a real flesh and blood animal, it must be genetically close to gorillas and the other great apes as well. It is, therefore, not illogical to hypothesize that these creatures might possess scent glands like some of their great ape cousins. The excretions of these glands could very well explain the awful smell so often attributed to these creatures.

Terrible smells, however, are not always reported by alleged wood ape witnesses. Often, no smell at all is noticed at the time of a sighting, even if it took place in very close proximity to the animal. Other witnesses have described a wide range of scents ranging from a vaguely equine-like odor to an almost pleasant earthy smell. The lack of any smell at all has often been explained away those interested in the phenomenon by several different theories.

“The witness must not have been close enough to the animal.”

“The witness was so traumatized by what they were seeing that they didn’t notice the smell.”

“The witness must have been upwind from the sasquatch.”

“Bigfoot only emit odor when they are surprised or frightened. If there was no odor, the animal must have been aware of the presence of the witness the whole time.” 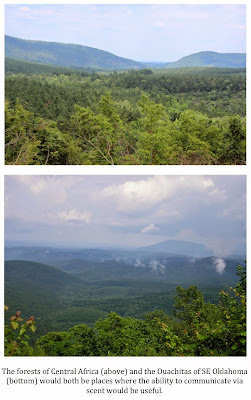 These, and a myriad of other circumstances, could certainly explain at least some of the times a discernible odor is absent during an encounter. They cannot, however, explain the other more subtle and varied scents described by witnesses. That is where the results of the University of Stirling study truly come into play. If apes can consciously control when they broadcast their scent, and to what degree, then it is possible the sasquatch could do so as well. If so, it could go a long way toward explaining the various scents, or total lack thereof, witnesses continue to report. Powerful, overpowering sour odors when broadcast could be territorial warnings for invaders to stay out. They could also be a way for a dominant male to let the members of his troupe know where he was or that intruders are in the area. More subtle scents could be “business as usual” communications between family units who are not always within site of one another in the dense forests and wetlands in which they are most often reported to live.

I, and many of my fellow NAWAC members, have experienced a wide range of scents in our quest to document these animals. There have been times when it almost feels like you walk into a wall, the smell is so bad, but within moments it is gone completely. I have often wondered how a smell that is so powerful can be there to such a strong degree one moment and then completely gone just seconds later. Did the animal move away? If Lee and Klailova are right, and gorillas can consciously control when, and to what degree, they broadcast their scent, and if the sasquatch does have scent glands similar to those of gorillas, and if they can control them in the same manner, then the answer could simply be the animal “turned off” his scent. It may not have moved off at all and may, in fact, still be very close but is, from an olfactory point of view, undetectable.

Admittedly, much of what I have discussed here is speculative in nature. At this time no one can say for sure what anatomical features wood apes possess or whether they are closer to humans or apes on the evolutionary scale. It continues to fascinate me, however, that the more we learn about the behavior and anatomy of great apes, the more plausible certain alleged sasquatch behaviors and reported encounters with them become.