Following is my write-up of a recent investigation I did concerning an alleged sighting of a sasquatch, or wood ape, type creature within the confines of Palmetto State Park. What follows is my write-up. For the full text of the witness's original report, visit the NAWAC site here.

This investigation was conducted as a result of an incident that allegedly occurred in Gonzales County, Texas, within the confines of Palmetto State Park, 08 June 2014.

The witnesses, a husband and wife, are avid hikers and decided to stop at Palmetto State Park for a hike on their way home from a trip to New Braunfels. The pair live farther to the east and stopping for a hike was a welcome way to break up their trip and get some exercise. 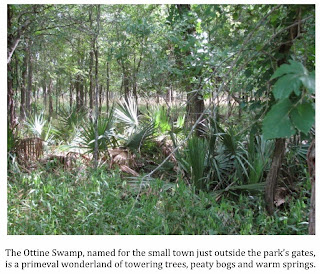 The couple began their hike on the San Marcos River Trail and located what they believed to have been a very large footprint in the sandy soil just off the main trail. The track was located close to one of the spots where hikers can leave the trail and negotiate the steep riverbank to reach the San Marcos River, approximately 30 feet below. They did not think too much about the track at the time other than the husband commenting, “That was one big boy,” as the track, according to the couple, measured approximately 16” in length. The pair proceeded to negotiate the steep incline to the waters edge below the trail. After taking in the sites along the water and taking a short break, the pair began making their way back up the bank to the trail. The female witness walked ahead of her husband and reached the top first. The bank, slick from recent rains, was giving the husband some trouble as he tried to walk back up. He decided to attack the incline quickly in the hopes that his momentum would be enough to propel him to the top. Just as he picked up his pace, a large rock struck the ground behind him. The rock struck the spot where, in his estimation, he would have been standing had he not decided to pick up his pace just a few seconds before. Both hikers heard the thud of the rock impacting the hillside and then tumbling down the incline toward the water. The husband stated, “Somebody just threw a rock at me!” The wife initially believed that her husband was playing a joke on her until she saw how angry he was about the incident. Once the couple crested the hill, they took a good look around and below them in an effort to spot the rock thrower. They saw no one. A bit confused and perturbed, the couple continued their hike.

As they walked on, the pair heard various snaps and breaks, which led them to believe the local wildlife was very active that day. Shortly before reaching the point where the San Marcos River Trail meets the Mesquite Flats Trail, the couple heard a loud vocalization from just behind them and in the direction of the river. The couple described the noise as a howl of some kind. They described the sound as similar to that of a cow bellowing but different and deeper. It should be noted that the male witness is a USDA meat inspector by trade and has worked in a slaughterhouse for years. He is quite sure he knows every sound a cow is capable of making and insists what he and his wife heard that day was not a cow. The couple was a bit unnerved and the thought occurred to them that they were being followed or stalked by the unseen rock thrower. Deciding this kind of thinking was silly, the pair decided to continue on the outer loop of the trail instead of taking a shorter route back to the parking area. 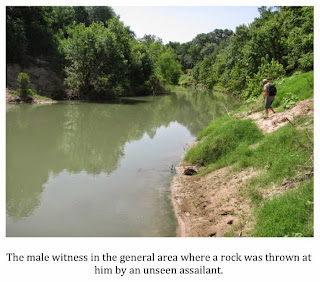 Shortly after entering the Mesquite Flats Trail, the pair heard another loud vocalization from behind them that was identical to the first howl a few minutes earlier. The pair, getting more uneasy by the minute, picked up their pace significantly. The hiked roughly ¾ of a mile without incident, the female walking about 15-20 feet in front of her husband. About ¼ of a mile from the point where the Mesquite Flats Trail transitions to the Ottine Swamp Trail, the couple crossed a long boardwalk-style bridge. The male witness was no more than 30 feet beyond the bridge, his wife ahead of him, when the couple heard a loud snap behind them. They wheeled around quickly to see what had caused the loud snap. The male witness's attention was focused on a tree limb that had appeared in the middle of the trail. It had not been there moments before. The limb was a bit curved, almost bow-like, in shape and was still rocking or wavering as it rested on the trail. As he stared at the stick, he caught a glimpse of something black to his left moving quickly away from the trail. The female witness was not distracted by the stick in the trail and caught site of a large, black figure running at breakneck speed from her right to left away from the trail. She got a good, if brief, look at the figure. She described it as jet black and “ungodly fast.” She was positive that what she saw was upright and bipedal. While mainly taken aback by the speed of the figure, she also noted that it was very large. The female witness described the figure as “massive.” The only sound the pair reported hearing was four heavy “thumps” as the figure ran away from them.

The couple made their way closer to each other and stared out in the direction in which the figure had fled. As they looked, they both saw it, partially obscured by a tree but peeking around it and seemingly looking back at them. The figure was now roughly 40 yards from the amazed couple as they stood on the trail. The couple decided to get going and began their hike onto the Ottine Swamp Trail, all the while trying to keep an eye on the large black figure that appeared to be observing them. The trail took a bend back to the right shortly thereafter and some vegetation blocked their view of the figure for a few moments. When the couple got a bit farther up the trail and again had a window through which they could see the tree the figure had been behind, it was no longer there. Neither witness heard it move away. 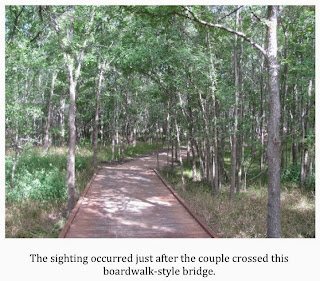 Now thoroughly unnerved, the couple hiked quickly down the Ottine Swamp Trail and back toward Park Road 11 and the parking area. Roughly ½ mile from the end of the trail, the pair heard one last loud vocalization. It was the same loud bellowing/howl they had already heard twice previously. This time, however, the vocalization originated from a spot much closer to them and, much to their chagrin, ahead of them, between them and the perceived safety of the park. Cautiously, but quickly, the couple covered the final ½ mile and made their way back to their vehicle.

The witnesses immediately went to the park headquarters to report their experience. They were surprised to hear from the rangers that they get similar reports often. The witnesses claim the rangers told them the most common experiences are strange sounds/vocalizations and rock throwing. While at the park headquarters, the couple got a brief education on the history of the Ottine Swamp thing or Ottine Swamp monster. The creature is extremely well known locally and sightings go back decades. The park actually promotes the monster in their gift shop. A framed photograph, allegedly showing the creature, taken by a camper in 2011 hangs on the wall. A small bigfoot figurine adorns the mantle. Swamp monster t-shirts are for sale and a handout is available, free of charge, which briefly documents the history of the thing in the Ottine Swamp. A bit overwhelmed, the couple returned home and immediately set about doing some research on their own. It was during this research that they came across the NAWAC site and filed a sighting report. 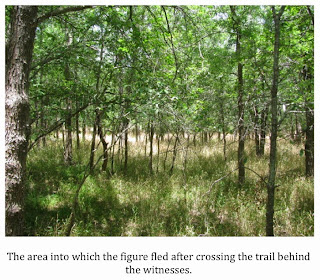 I found both witnesses to be very credible. Their story did not vary from the initial written account. Each of the witnesses experienced moments while retracing their steps that day when they got very nervous and had to take a moment to regain their composure. At one such point, the male witness struggled to light a cigarette due to his hands shaking so badly. I detected no signs of deception and, to the contrary, came away feeling that the couple had encountered a form of wildlife for which they had no explanation.

The NAWAC continues to collect and investigate reports of encounters, both contemporary and historical, with strange, bipedal ape-like creatures in Texas and its neighboring states that fit the traditional description of the wood ape.
Posted by Mike at 11:55 AM