Monocled Cobra on the Loose in Brownwood, Texas

Here’s a scary story that illustrates one of the issues created by the exotic animal trade.

KCEN, an NBC affiliate out of central Texas, is reporting that a deadly sunset monocled cobra (Naja kaouthia)is on the loose in Brownwood, Texas. Brownwood is a town of roughly 20,000 people about 150 miles to the southwest of Dallas.

Nick Ferguson, the animal control officer in Brownwood, said the 12-16 inch long cobra escaped from its enclosure sometime last Monday. The owner had been looking for the snake for several days when he was arrested on Wednesday on a drug charge (obviously, this guy is a real winner). It was at this time that the authorities became aware of the missing cobra.

Ferguson feels the snake could still be somewhere in the house but can’t be sure of that. It is quite possible the snake has escaped into the surrounding area. A herpetologist from the Abilene Zoo has been brought in to help with the search as has a Texas Parks & Wildlife Department game warden. 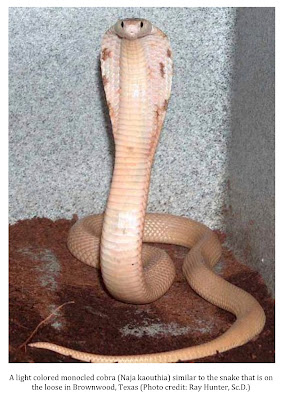 I am no herpetologist but from what I can tell the “sunset” monocle is simply a pale, almost albino, monocled cobra. Like other cobras, the monocled cobra is extremely venomous and dangerous. The venom is neurotoxic in nature attacks the nervous system of the prey. This leads to flaccid paralysis and possible death due to respiratory failure.

Let’s hope that the snake has not left the home of the owner and that the authorities are able to get it rounded up quickly.