When you think of the various dangerous fish that swim the waters of the Gulf of Mexico, images of tiger sharks, bull sharks, stingrays, and jellyfish probably come to mind. The exotic lionfish (Pterois volitans) would likely not jump to the top of your list of dangerous Gulf species. Unfortunately, that may change soon.

The lionfish is a beautiful animal that is characterized by reddish-orange, black, and white stripes, flashy pectoral fins, and venomous spikes. Adults average about 12” in length and are native to the waters of the Indo-Pacific. The lionfish is prized by aquarium enthusiasts due to its distinct and colorful pattern. 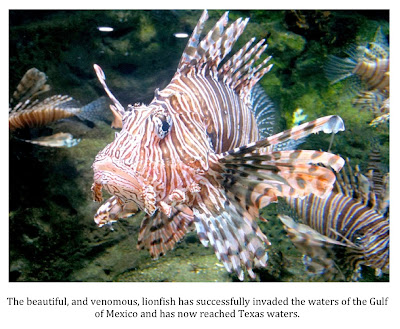 Three different lionfish have been spotted at Flower Garden Banks National Maritime Sanctuary. The sanctuary is east of Galveston Island and approximately 100 miles south of the Texas-Louisiana border. The spot is very popular among divers and fishermen due to the abundance of marine life living in close proximity to the coral reefs found there. That abundant marine life may now be in danger.

Lionfish are voracious predators that live near structure (coral reefs, oil rigs, shipwrecks, etc.) and feed on an extremely wide variety of creatures including important commercial fish like grouper and snapper.

Emma Hickerson, a research coordinator at Flower Garden Banks said, “They are pretty indiscriminate. They eat fish, crabs, shrimp, everything.”

The species has been known to completely take over reefs and other structure and virtually wipe out other species living there.

“What we have seen in the Tortugas and the Florida Keys is that they dominate and there are no small fish left,” Hickerson said.

The presence of lionfish in the Gulf of Mexico could have a domino effect. One such effect pointed out by Lance Robinson, executive director of coastal fisheries for the Texas Parks & Wildlife Department, was that the species feeds on parrotfish. Parrotfish are vital to the health of coral reefs as they eat algae. If the parrotfish disappear then there is a very real possibility that the algae will grow unabated and smother the coral. It is scenarios like this that have had the attention of organizations like the TPWD and the National Oceanic and Atmospheric Administration, which oversees Flower Garden Banks, for the better part of 12 years.

Officials have watched as the lionfish’s territory has expanded. The species, first spotted off of south Florida in the 1990’s has moved up the Atlantic coast as far as Long Island, infested the Caribbean, and spread to the Gulf coast. Lionfish have been found off the coasts of Alabama, Mississippi, Louisiana, Texas, northern Mexico, the Yucatan Peninsula, and Cuba.

Hickerson pointed to the presence of the Gulf’s many oil rigs as an aide to the lionfish’s quick migration.

“Not only are there reefs for them to live around, but you have the added dynamic of up to 4,000 oil rigs in the Gulf, which provides them places to live. That’s how they ‘island hop’ around,” he said.

Experts feel that there is little possibility that the lionfish will not continue to spread and infest the Texas coast. Beside the favorable habitat found in Texas waters, there are no natural predators of the lionfish to be found here.

“There is nothing to keep them in check,” Robinson said.

So, how did this happen? As with other invasives, the problem stems from issues within the exotic pet trade. In this case, it is the aquarium trade.

“They are pretty fish, that’s why they are popular for aquariums,” Robinson said.

Hickerson adds, “They really are quite pretty. They just don’t belong here.” 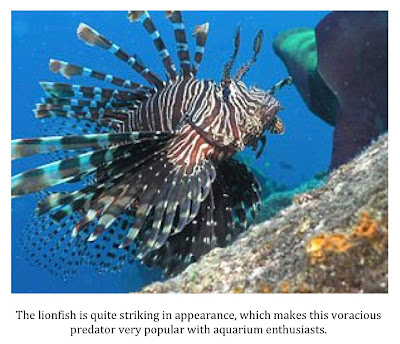 Efforts to control the lionfish population will likely have to be multi-faceted. They are good to eat and have a white, mild flesh that is quite tasty. Officials hope that a market will develop for the meat of the lionfish. This won’t be enough alone, as divers can’t easily get to the depths where lionfish live (they’ve been observed as far down as 1,000 feet). Direct removal of the species and the development and management of a healthy population of natural predators will also have to play large roles. Along these lines, park officials at the Roatan Marine Park in Honduras have attempted to train sharks to feed on lionfish in an effort to control the Carribbean population of the species. Results thus far have been mixed. Likely, the only way the lionfish population will be kept under control will depend on whether or not a natural predator steps up that feeds off the larvae and young of the species. Without that the population could skyrocket.

Due to the depths at which lionfish usually live, there is only a minimal risk to swimmers. Divers and fishermen are more at risk, however, as lionfish have a nasty and aggressive disposition and are extremely territorial. Cases of aggression against divers have been documented. Lionfish venom produces systemic effects such as vomiting, fever, and sweating. Generally, while extremely painful, the sting of the lionfish is not fatal to humans though there have been a handful of deaths attributed to the venom of the species.

Even if population control efforts are largely successful it appears the lionfish is here to stay. The successful invasion of lionfish in the Gulf of Mexico once again points to the need for much stricter regulations on the exotic pet trade. Invasives like zebra mussels, snakehead fish, Burmese pythons, and even the wild burros of west Texas are wreaking havoc on ecosystems that have no defense against them. We’ve got to get this problem under control.

There is just too much to lose if we do not.