Six highly endangered whooping cranes (Grus Americana) are currently wintering at Granger Lake northeast of Austin. It has become something of a must see for birders who have never had the opportunity to see these awesome birds at their normal wintering grounds in and around Aransas National Wildlife Refuge north of Rockport. 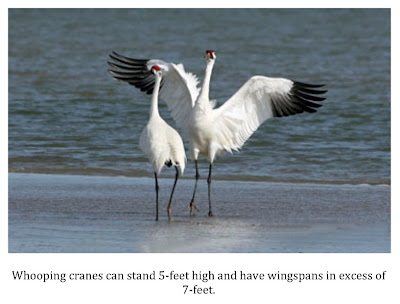 Why Granger Lake? Experts theorize that the severe drought conditions Texas has faced over the last couple of years have severely cut into the population of blue crabs and other food sources for the wintering whooping cranes on the coast. A record 300 cranes were expected this year near Aransas Pass but it seems the birds have spread out a bit in search of enough food to sustain them. The drought has no doubt forced these birds to diversify their diets a bit. The whooping cranes at Granger Lake have been spotted feeding in cultivated fields near the impoundment and are probably subsidizing their diets with freshwater mussels, frogs, and fish. 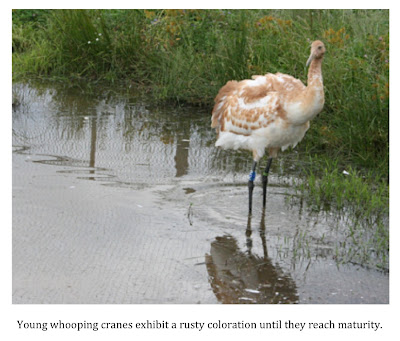 While rare, sightings of whooping cranes are not unprecedented in central Texas. The cranes do fly to Texas yearly and there always seem to be a few that stop somewhere other than the usual wintering grounds along the coast. Each time it happens it, understandably so, creates quite a stir.

My brother, an avid birder, visited me over the holidays. He had gotten wind that two family groups of whooping cranes had been seen consistently over the last few weeks at Granger Lake. We made the trip out to Granger and managed to spot three of the great birds. Unfortunately, they were too far away for me to get any pictures. We could see them through binoculars but, alas, no photographs could be taken. The birds were just off an island in the middle of the lake. It might be more accurate to say what is left of the lake. The “island” was actually a sandbar that should be under water. It was only visible due to the extremely low water levels of the impoundment. That being the case, we simply could not get any closer. 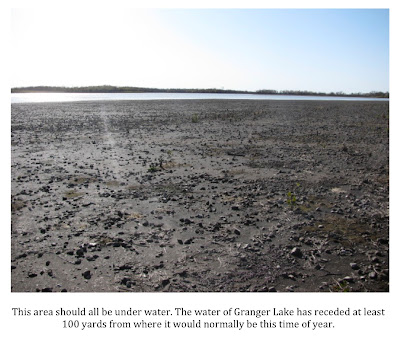 Locals are hoping that these birds make Granger Lake their winter territory and will return year after year. It remains to be seen if this will happen but it would be a boon for local birders if it were to work out that way. 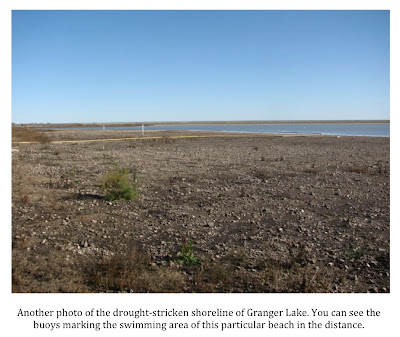 I would like to caution against approaching these birds too closely. Though the whooping crane population has bounced back over the last few years the birds remain highly endangered. As such, disturbing a family unit in any way could prove detrimental. Keep your distance and enjoy these great birds from afar should you decide to go see them.
Posted by Mike at 10:02 PM