According to the Texas Hunting website, and other sources, a 102 lb. mountain lion (Puma concolor) strolled right into downtown El Paso the week of May 14. The lion was seen in various locales around the city before wandering into a parking garage that, ironically enough, is used by Texas Parks & Wildlife employees. 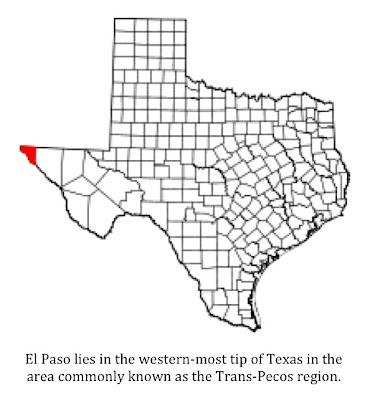 Officials were able to shoot the cougar with a tranquilizer dart but it leaped from the second floor of the parking facility and bolted in an attempt to escape. The tranquilizer dosage may have been off as the mountain lion seemed unaffected for several minutes. During this time, the big cat ran through a schoolyard and onto the property of a car wash. Authorities, after evacuating the employees and customers, closed the security gate of the property in an attempt to hem in the lion. At this time the authorities were able to dart the cat a second time. Again, however, the drug proved ineffective and the animal took off again and was on the verge of escaping a second time. Officials deemed the agitated cougar a serious threat to the public at that time and put it down. 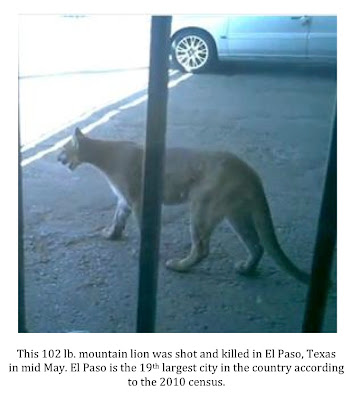 El Paso is a city of nearly 650,000 people and lies in the westernmost part of the state. When the population of Juarez, Mexico, which lies just across the Rio Grande River, is added, more than 2 million people live in the El Paso metropolitan area. Despite the large population, El Paso sits in some pretty rugged country. The Franklin, Juarez, and Hueco mountains border or lie within the city limits. In addition, the Rio Grande River flows just a mile from the heart of the city. The area constitutes prime cougar habitat. Just three years ago, a game warden shot and killed a mountain lion in a west El Paso neighborhood so this was not an isolated incident. 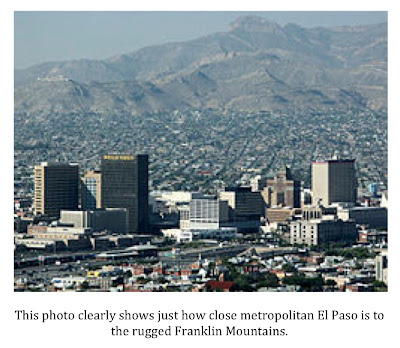 Why this mountain lion decided to take a tour of downtown El Paso is not clear. It is possible it was sick, hurt, or seeking a water source. It is also possible, at least in my opinion, that these big cats are becoming more comfortable living in close proximity to populated areas. If so, more and more incidents along the lines of what happened in El Paso are going to occur across Texas.

I believe mountain lions are making a comeback across the state. The TPWD does not agree and continues to hold to the premise that these big cats maintain breeding populations only in the Trans-Pecos region and along the Rio Grande River in deep south Texas. Cougar sightings farther east are often dismissed as misidentifications or escaped pets. I found it humorous that, for all practical purposes, this mountain lion walked right into the offices of the TPWD. I’m afraid it will take a similar incident somewhere in east Texas for officials before officials recognize these big cats are returning to their old habitats.
Posted by Mike at 12:34 PM