A reader sent me the picture below of a giant snake slithering down the side of a road. The reader did not claim to have taken the picture but said the story was that the snake was photographed near the Morganza Spillway near Krotz Springs, Louisiana as it fled the impending flood waters from the swollen Mississippi River. 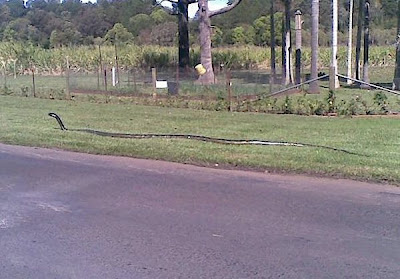 I have no idea if the photo is genuine. I’m guessing it is either a clever fake or a genuine photo of a snake from some other part of the world (though I can't tell just what species it might be). I am leaning toward a good photoshop job. The coloration and head shape look "mamba-like" to me. The black mamba (Dendroaspis polylepis) is a very long snake, and does hold its head up high when moving, but is not close to the length represented in this photo. In addition, there is something about the shadow beneath the snake’s head that doesn’t look quite right to me. Just my opinion but I’ve been wrong before.

If it is a hoax the perpetrator is playing off a real story. The Morganza Spillway has been opened in an attempt to spare Baton Rouge and New Orleans from potentially devastating flooding. Saving these two highly populous areas required flooding hundreds of acres of rural forest and farmland and the animals of the area are on the move as documented here by CNN.

In any case, it is a fun picture. I will be curious to see if it is debunked quickly.
Posted by Mike at 10:10 AM