I received the following email from a reader two days ago.

My name is XXXX, I live in Kempner,Tx. A few weeks ago I saw a critter of some kind on my property, at first I thought is was a deer but it had a long tail, maybe a fox, no a fox has a bushy tail. I did not have a camera handy but I had my cell phone so I took a picture with it. The phone does not have a zoom lens so the picture is not very good but I got a good look at this thing. It looked like a dog but had large ears and a very long thin tail. After seeing pictures of "Chupra Cabras" on TV and the internet that were killed recently I am almost certain what I saw was the same thing. I am attaching the picture I took in case you have some method of enhancing it and perhaps let me know what you think it is. 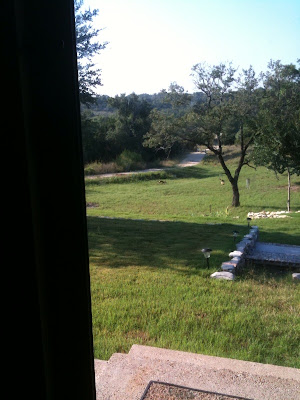 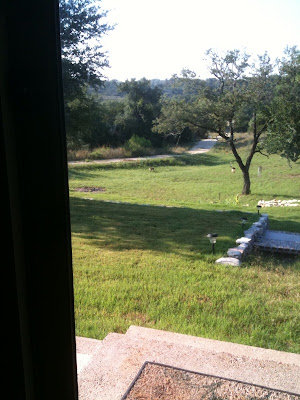 A relatively small animal of some kind is visible in the photos. As the reader mentioned, the photos were taken with a cell phone that did not have the ability to zoom in on the creature. It is hard to tell much about the animal in the photos other than it appears to be about the size of a medium sized dog. I can't be sure about this as I am unfamiliar with the property and don't have much to use for scale; however, the animal seems to match up well with the description the reader gave in his email.

I attempted to enlarge the photo with mixed results. As would be expected, the more I zoomed in the more pixellated and blurry the image became. What you can see is interesting, however. The animal exhibits what appear to be a pair of pretty large ears and a long whip-like tail. 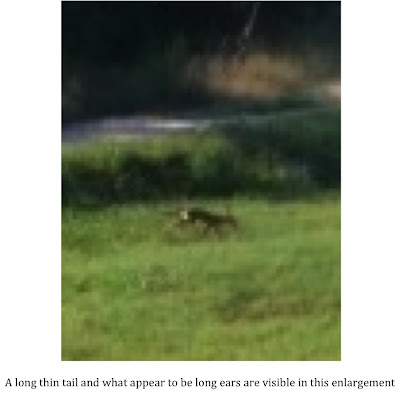 It is hard to tell if the animal is, indeed, hairless but the tail does not seem at all "bushy" as one would expect to see on a coyote or a fox. The profile seems to match up favorably with what has been seen in the "blue dogs" of south Texas. 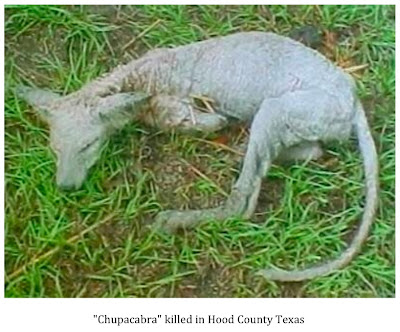 Kempner, Texas is located in Coryell County and is not really all that far removed from areas where these animals have been spotted on a fairly regular basis. The owner of the property is going to keep his eyes open. If he catches another glimpse of the animal he is going to let me know. He said he is open to my placing a couple of game cameras on his property.

Is the elusive "chupacabra" haunting Central Texas? I am hoping time will tell.
Posted by Mike at 10:23 PM