I made a quick trip to SE Texas last Saturday. The purpose of the trip was to check on the game camera I had placed in the field last month. The camera was placed in the same creek bed where barefoot humanoid tracks were found last May. 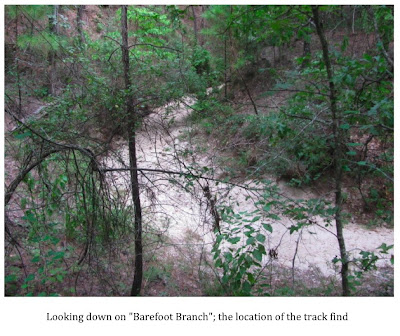 Various delays and distractions kept me from getting down to the area early enough to do much looking around. I arrived in the area at about 3:30pm and proceeded immediately to the camera location. The weather was beginning to look a bit threatening and I didn't relish the thought of being caught out in a thunderstorm. I was alone so I was able to double-time it and reached the camera location fairly quickly. I was relieved to find the camera right where I had left it. It seemed to have shifted slightly but, otherwise, was in perfect condition. I was greatly excited by the possibility of what I might have captured on the memory card. 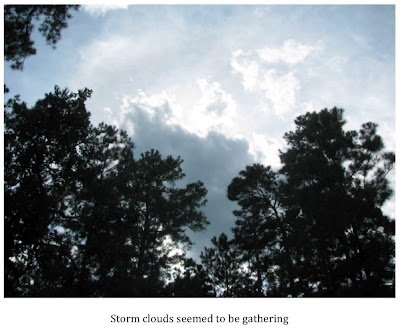 I decided to pull the camera (to be replaced by a higher end model ASAP) and put it in my backpack. I was in a hurry to get back to my truck, where my laptop was locked up, so I could view the photos; however, since I had made such good time to the camera location, I decided to take some time and walk the creek in the hopes of finding something interesting. I failed to find much of interest and decided, prompted a bit by some not too distant thunder, to hoof it on out and get back to the truck. 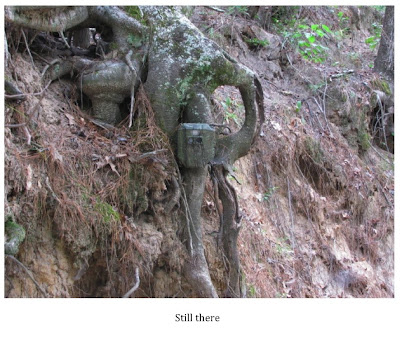 The heat, being August in Texas, was awful and the humidity was high. I had expended a lot of energy in hustling out to the site and in walking the creek. I began to feel the effects and needed to stop and sit down a couple of times. By this time, I was completely soaked with sweat and was on my way to developing a doozy of a headache. I had only taken a couple of bottles of water on the hike, as I didn't intend on being out very long, and they had been drained back in the creek. I have no doubt mild dehydration was causing my headache and fatigue. By now, it was approaching 5:30pm and it was as hot as it had been all day. The forest was absolutely still. There was not even the hint of a breeze. The threatening clouds had retreated to a point where I could no longer see them. The incoming storm had been nothing more than a tease.

After resting for a while, I resumed my hike back to the truck. I was, according to my GPS unit, about .30 of a mile from my truck when a gunshot rang out from just East of my location. It sounded very close. I'm guessing the shooter was within 100 yards of me. I instantly dropped to a knee. I did not hear the whiz of a bullet flying through the air near me or hear a round strike any of the vegetation around me so I felt pretty confident that the shooter did not realize I was in the neighborhood. About then a second shot was fired. I was still on a knee but lowered my head even more upon hearing this shot. Again, there was no sound of a round hitting anything close to me but this guy was just too close for me to take a chance on standing up and continuing my hike. I decided I needed to let this guy know I was in the area. 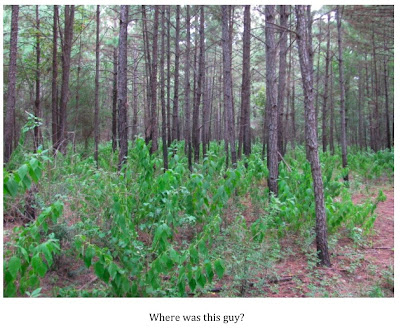 Within two or three seconds two more shots rang out. Now to be fair, I can't say for sure the shooter heard me shouting at him before he squeezed off those last two rounds. I no longer felt nearly as confident, however, that the guy was just out varmint hunting or target shooting and was unaware of my presence. So, I unholstered my sidearm and fired two rounds of my own into the ground. I was not playing "cowboy" or trying to threaten anyone. I just really needed this guy to realize I was close by and that he needed to hold his fire. I also wanted him to know, in case he was playing games with me that I was far from helpless. I stayed hunkered down about ten minutes but heard no more shots. Cautiously, I stood up and resumed my hike back to the truck. I made it to my vehicle without incident. I sat down on my tailgate to rest and take in some more water (The temperature was still 101 degrees at this time). I changed into some dry clothes and loaded up my gear. All together I probably stayed at my truck at least another half hour before cranking it up and leaving. I never heard another shot. I guess my message had been received.

The camera did not manage to capture much of anything. The coolest photo is of a bat in flight. I do think sometimes there can be significance it what was not photographed. No humans were photographed walking the creek. Not one hiker had come by in a month. Take from that what you will. 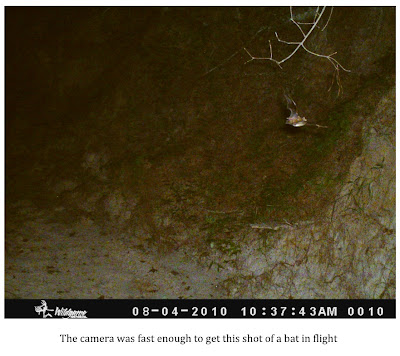 The trip highlights some of the potential dangers of being out in the field. First, whenever possible, have a partner with you. I had notified fellow TBRC members that I was making the trip but was by myself. Second, always take more water out with you than you think you will need. I know this but still managed to convince myself that, even though it was terribly hot and humid, I would be in and out quickly and the extra weight of more water would do me more harm than good. Stupid. Third, do not go out unarmed. Understand that you can arm yourself with something other than a gun. A good knife is invaluable in survival situations of many kinds. I choose to carry a sidearm, I am licensed by the state of Texas to carry a concealed handgun, but always have a good knife with me as well. I don't know if the guy who was out in the woods firing his weapon actually intended any mischief towards me but I can tell you that I would have been extremely nervous had I been unarmed in that situation. Wild animals are often the least of your worries while out in the deep woods.