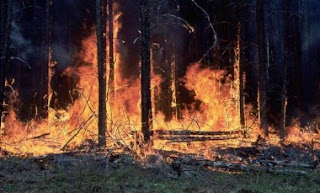 I figure now is as good a time as any to start posting some of the "sasquatch classics", and my thoughts on them, as promised last year. These are the stories that have become legendary not only to bigfoot enthusiasts and researchers but to many in the general public as well. These are the accounts of some of the most incredible encounters of all time with these mysterious creatures. Some of these stories are very well known. For example, the incidents at Ape Canyon, Ruby Creek, and the abduction claims of Albert Ostman have been told and retold many times. Others are more contemporary and, perhaps, less well known. I hope to retell the details of these encounters as accurately as possible and then offer my thoughts on them. So, without further adieu, here we go.

The first story I would like to discuss is the incident that allegedly occurred in the vicinity of Battle Mountain, Nevada in August of 1999 and might be deemed a "modern classic". On, or about, August 6 several wildfires sprang up and engulfed the wilderness around Battle Mountain. Several state and federal agencies were present to help in battling these fires. These agencies included, but were not necessarily limited to, the U.S. Department of Fish and Wildlife, the Department of the Interior, the Bureau of Land Management, and, of course, numerous fire fighting units from Nevada and its surrounding states. According to a witness who claimed to have been on the ground during the attempts to contain the fire, a sasquatch was injured during the blaze and was captured by fire fighters. The witness submitted a report to the BFRO on August 7, 1999. His account was not deemed credible by BFRO curators and was never published. Thom Powell, author of The Locals, however, felt there might be something to this report and pressed for more details. You can read his entire account of the incident here but I will try to hit the high points below.

The basic story is that a large hair-covered creature came stumbling/crawling out of the burning forest as the witness and other emergency personnel watched. The creature moved on all fours. "Not like a bear. Like an ape," the witness said. The animal was clearly badly injured and was quickly surrounded by fire fighters. The creature, according to the witness, "seemed to know that he was captured and he just gave up. The animal just sat down on its buttocks and exhibited no will to resist."

The "patient" was laid out on the ground and medical personnel were summoned. According to the witness, the creature had suffered serious burns on its hands, feet, legs, and trunk. Much of its hair had been singed off as well. The story goes on to say both a veterinarian and an M.D. arrived and began working on the animal. Interestingly, the vet deferred to the M.D. as the "animal" appeared so human-like. The creature was triaged, tranquilized, and hauled off on a much too small stretcher. The witness said the animal was transported away to an unknown location in an unmarked van. The personnel in charge feared an ambulance would attract unwanted attention as people in the surrounding areas, as well as the media, would assume a fire fighter had been injured and would want details. Once the creature had been taken away, the approximately 25-30 eyewitnesses were given strict orders not to discuss what they had seen. 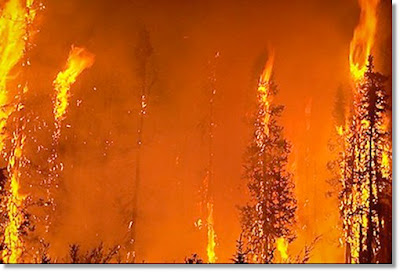 Here are some of the details that the witness shared with Thom Powell:

- The creature was approximately 7.5 feet long/tall and had human-like arms
and legs. The face was not like a man or an ape but somewhere in between. The
creature's genitalia was like that of an uncircumcised male human. Hair covered
most of the animal's body except the chest. The chest had sparse hair. The palms
of the hands were bare with five digits including a human-like opposable thumb.

- The creature responded to touch, specifically pats and strokes, with groans and
moans directed toward care givers as they tended its wounds. It seemed to realize
the humans attending it were trying to help. The creature suffered 2nd and 3rd
degree burns over roughly 45% of its body.

- There was no urination, defecation, or vomit at the scene. A clear liquid was ob-
served seeping from the animal's wounds as was blood.

- The creature exuded a "natural" odor similar to a strong equine smell.

- The head was not sloped but the forehead was "heavy boned". The lips were
large but human-like. The ears were also human-like and tight to the head.
The ear lobes attached to the head and did not dangle. The animal was de-
scribed as "strong jawed."

The witness added more details, which can be read at the link provided above.

This tale has always intrigued me. It is exactly the sort of scenario that could lead to the discovery and documentation of the sasquatch. The idea of finding an injured sasquatch as the result of a raging forest fire is not so far fetched if you are able to bring yourself to accept the possibility of the species' existence in the first place. The amount of detail given by the witness is startling. Much of what was described matches up well with what other witnesses have reported. However, the story also gets pretty deep into the possibility of government cover-ups and conspiracies that seem to be so prevalent in the bigfoot mythos. The witness claims he, and the other witnesses present that day, were threatened with the loss of their jobs and retirement if they spoke publicly about the incident. The creature was whisked away in an unmarked van to an unknown location and was never seen again. This is a little too convenient and "Roswell-like" in some peoples minds.

So, what to make of all this? To me this story has a bit of everything. Maybe a bit too much for my liking. While I can see the scenario unfolding as described it is the aftermath that troubles me. Secrets are incredibly hard to keep. The more people who know the secret the more difficult it becomes to keep. Even if the numerous witnesses really were threatened with being fired it is almost impossible for me to swallow that none of them have talked since 1999. It has been more than a decade now since these fires ravaged the area around Battle Mountain, Nevada. The witness claims 25-30 people saw this creature and everything that transpired with it. Yet, this one guy is the only one who has spoken up. Surely, some of these people have changed jobs in the years since the incident on their own. If so, their reason for remaining quiet would be gone. What would be stopping them from coming forward now? Even if they remained hesitant to go public with their knowledge I would think it almost a certainty that the story would have been circulated after a few drinks with friends, around a campfire, or even while engaged in "pillow talk." Somehow, the account would have gotten out. The fact that the story of the bigfoot of Battle Mountain is not more well known seems to indicate one of two things. The other witnesses have remained silent all these years or the incident did not occur at all. As much as I would like to believe otherwise, the latter is the most likely.

Without corroborating evidence or testimony the story doesn't seem to hold up. This would be the sort of case that might be kept in a file marked "unlikely" but not thrown out all together. Without some sort of corroboration it is just another story proving nothing. If another witness were to ever come forward, my opinion on this could certainly change. As it stands now, the tale of the "Bigfoot of Battle Mountain" will, in my mind at least, remain in the same gray area as many other sasquatch tales. Fascinating, but inconclusive.
Posted by Mike at 9:10 AM