All of you who have read this blog for any length of time at all know that the subject of large, black, long-tailed cats, or “black panthers,” is something in which I am particularly interested. This subject has become the number one most popular topic on this site. More people contact me about black cat sightings, by far, than sightings or anecdotes about any other animal (known or cryptid). 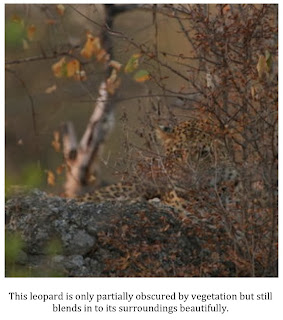 I have always felt that there must be a biological entity behind these “black panther” sightings. There are just too many incidents and too many credible witnesses to believe otherwise, in my opinion. If I am right and there is a real animal out there responsible for these sightings, what could it be? I’ve put forth several possibilities over the years: jaguarundi, jaguar, unusually dark-colored cougars, for example. Perhaps a combination of these three animals plus the occasional case of mistaken identity could explain the phenomenon? I’ve also entertained the idea, briefly, that maybe cougars in the wild do occasionally exhibit melanism as well as the possibility of an entirely undocumented large, dark-colored cat might exist in Texas and the deep South; however, the culprit most often suspected of being responsible for “black panther” sightings by those who think there is something to all of this is, without a doubt, the jaguar. 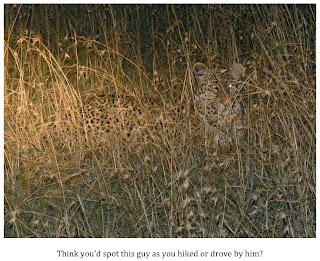 In the past, I’ve been very hesitant to jump on the jaguar (Panthera onca) bandwagon and anoint this big cat as the number one suspect in the hundreds of black cat sightings. Jags fit the bill as far as the size most often reported by “black panther” witnesses. People often describe “Labrador-sized,” or larger, cats with long tails. The jaguar is the largest cat in the New World and ranges in weight from 125-250 lbs. under normal conditions with some males reaching weights in excess of 300 lbs. (very rare). Color morphism does occur in the species with melanistic specimens appearing almost totally black in color. While much more rare than their normal rosette-coated brethren, melanistic jaguars make up approximately 6% of the total jaguar population. That being the case, why have I been hesitant to grasp the theory that “black panthers” may very well be remnant, or Northward wandering, jaguars? 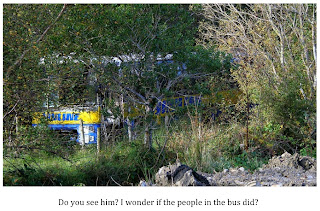 The answer is simple. While 6% of the jaguar population is not an insignificant number of individuals, it still leaves 94% of the population with the normal spotted coats. IF the black panthers of Texas are melanistic jaguars then why is nobody seeing or reporting the much more commonly colored cats? If these are jags people are seeing, the spotted individuals have to be here too. If that is the case, then they would be easier to spot than those of the melanistic variety. Right? 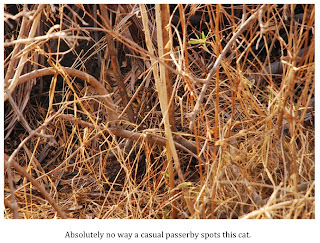 Spotted coats are a tremendous form of camouflage. It is the very reason so many wild cats are marked in this way. They are predators and need to be hard to see. Leopards, jaguars, bobcats, ocelots, margays, servals, cheetahs, young lions and young cougars all have spotted coats for part of, if not all, their lives. The spots allow these animals to blend into almost any form of cover as they break up the silhouette of the cat beautifully. I have come to the conclusion that maybe the large black cats being reported in the South are melanistic jaguars and they are being seen, while their spotted brethren are not, because their black coloration is not as effective a form of camouflage. 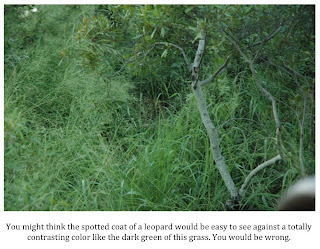 Allow me to demonstrate. Spread through out this post, is a series of photographs. In each photo there is a normally marked leopard or jaguar. These photos have all been circulating for some time now as a sort of “Where’s Waldo” game of find the cat. I’d seen them but not given them a lot of thought. Lately though, I’ve revisited them while considering them as something to study instead of just a hide-and-seek type of game. As you will see, or maybe not, the spotted coats of these cats make them all but impossible to detect while a solid black cat might stand out more. Imagine trying to spot one of these cats that is hunkered down in tall grass or a wooded area from a moving car or even as you walk through the woods. If it remains still, you aren’t going to see it. 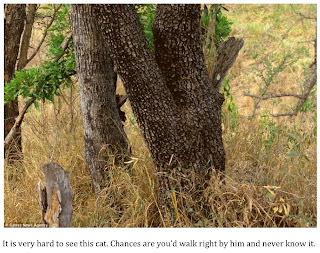 As a matter of fact, just standing or sitting perfectly still in and of itself can keep an animal well hidden. We, as humans, seem to depend on movement to a large extent in order to spot things. Add the fact that we, as a species, have become less and less in tune to nature and become unobservant, at best, and totally oblivious, at worst, and not many of these animals are going to be seen, not even those that are not thought of as having perfect camouflage. The photo below illustrates this point. See how long it takes you to see the wolf in the photo. Some will see the wolf quicker than others but there is no denying that he would be very easy to miss despite not sporting a spotted coat. IF the “black panthers” of Texas are jaguars, then the much more common spotted cats are here, too. They are just going to be almost impossible to detect unless they cross a road directly in front of a vehicle. Jaguars were native to Texas and much of the deep South at one time. Maybe they are making a bit of a comeback, much as cougars appear to be doing, across much of their old range.

What a great story it would be if it turned out to be so.
Posted by Mike at 11:56 AM