This post will be much heavier on photos than writing. That is good news as a picture truly is worth a thousand words. That being said, let’s go.

Two different readers have sent me photos of large cats over the last couple of weeks. Both sets of photos come from South Texas and both are interesting in their own way. I’ll take them one at a time.

The first two photos come from Uvalde County. The photos clearly show what appears to be a large, long-tailed cat of some kind. It is unusual in that the markings of the cat appear to be a cross between what you would expect to see on a bobcat and what you see on a common domestic/feral cat. The photo where the cat is in motion is the most interesting as it makes the cat look lean and extremely muscular. The photo where the cat is walking slowly gives a slightly different impression. It appears very, very thick, almost beefy. The head is very bobcat-like but the long tail eliminates the bob as a possibility. 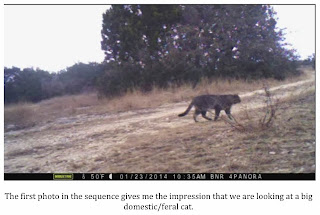 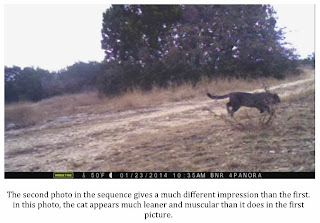 My response to the reader who sent me these photos was as follows:

The cat seems very large but there is nothing in the picture of known size to provide scale. At first glance, it seems as if the cat would be as long as the rutted road is wide, however, it could be a trick of perspective as the road is at an angle to your camera.

The coloring of the cat is very much like that of a common barn or house cat. The feet seem small for a truly big cat. It does seem very thick though.

What complicates matters even more is that I get a different impression from each of the two photos. The picture where the cat is moving slowly gives me the impression of a big feral cat. The impression I get of the cat where it is jumping/running is quite different. In that photo it appears much more lean and less "fluffy" looking.

The thing to do would be to get back to the site and photograph yourself or someone/ something else of a known size in that spot. Make sure the camera is in the same location. You could also measure the height of that small piece of brush the cat is walking by. If that is only a foot or so high then we know the cat is small. If it is 3 feet tall then we have something else all together.

Please let me know if you decide to go back and take some photos for scale.

The next set of photos also originates from South Texas. To me, they are more intriguing than the first set. The series of shots clearly show a cat of some kind that is a very dark charcoal gray to black in color. According to the reader who sent the photos to me, the pictures were taken from a pretty good distance using a telephoto lens. When the photos were shown to Texas Parks & Wildlife personnel, he was told he had pictures of either a bear or a coyote. There is one photo in the series where I can sort of see how someone might think “bear”… if I squint really hard. To say bear OR coyote is almost laughable to me as the two species do not resemble each other in the least. 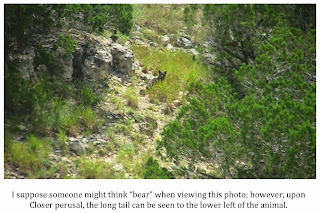 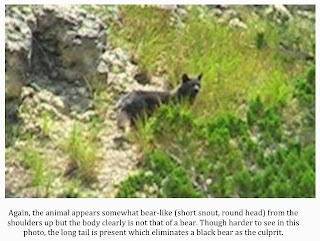 In my opinion, these are clearly pictures of a cat. That is really about all I can say. Are these photos proof of the existence of the ever-elusive “black panther?” Alas, no. Even the reader who sent the photos knows this to be the case as he said, “those are the absolute best photos I've seen from anyone who sighted a black cat, and still they're not definitive!” His willingness to admit this makes me doubt very much that we are looking at some sort of hoax. 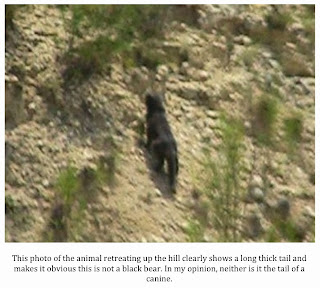 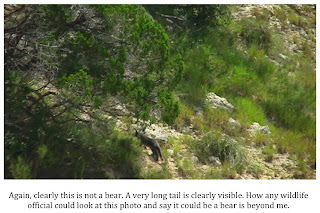 My response to the gentleman who sent the photos was as follows:

The shots are very intriguing. The problem is there is nothing in them to indicate scale. That being the case, it is hard to say how close the photographer was to the animal or how big it might have been. I can tell you it is NOT a coyote or a bear. It is a cat. Just don't know how large. 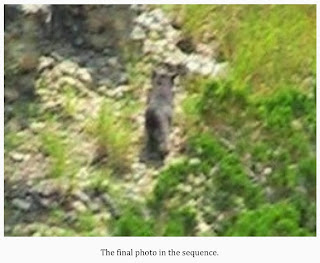 If you are beginning to think that all these photos seem to have the same issue (scale) then you are correct. It is just impossible to say how big this cat really was by looking at the photos. Critics will point out that the photographer could have been very close to the animal and it is nothing more than a normal domestic-sized cat. While I believe the story of the reader who sent these pictures, I can’t prove that such a critic is wrong. It cuts to the heart of the fact that a photograph alone will likely never suffice as definitive proof that the black panthers of Texas are a reality. They do, however, provide another anecdotal piece to this puzzle. Slowly but surely, we seem to be gaining ground on these elusive “ghost cats.”


*Please continue to forward me any reports and/or photographs of strange, odd or out of place animals. Feel free to make short comments to the post or, if you want to provide more detail or send a photo, use the Texascryptidhunter@yahoo.com email address.
Posted by Mike at 1:17 PM