I received an email recently from a lady who thought she might have a big cat visiting her property. She had found large tracks and was afraid for her livestock and children. After examining the photos of the tracks it was pretty clear they were of canine origin. I questioned her and it was revealed that the folks on the neighboring property had two Great Pyrenees that watch over a small flock of goats. The goats roam a pasture during the day but are penned up at night. My guess is that the pair of dogs has taken to wandering about a little at night once the goats are penned up and left the tracks in question.

The whole exchange got me to thinking and I thought that a post on the differences between dog and cat tracks might be worthwhile. On the surface, the tracks of these two very different types of animals are pretty similar. It can be difficult to tell the difference, especially if the track is not in pristine condition. There are, however, some telltale characteristics that you can look for in a track to help you determine whether a cat or a dog left the print.

The first thing to look for is whether or not claws are visible in the track. Cats of all sizes have retractable claws.* Generally, a cat’s claws are retracted while walking and, thus, do not appear in any tracks left behind. Canids cannot retract their claws which results in their marks being visible in their tracks most of the time (Pay attention to the type of soil in which the track has been impressed as cats can leave claw marks in soft, sandy or very muddy substrate). This is a quick and easy thing to look for and, while not 100% accurate, will usually help you determine just what type of animal trekked across your property. 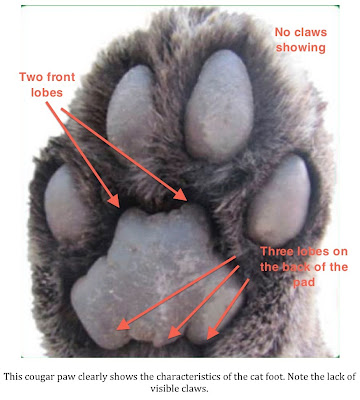 If the track is in good shape, a sure way to determine whether the print-maker was a canid or a cat is the shape of the paw pad. In a cat track the front edge of the pad just behind the toes will appear almost square. You might determine a slight dip in the middle of this area giving the appearance of two lobes. This will be very subtle, however, and will be hard to see except in the most pristine of tracks. The rear of the pad, opposite the toes, will show three distinct lobes. In a degraded track the lobes might appear less obvious but the rear of the pad will have more of a squared off and flat look to it than a dog track. A canid pad will appear almost heart-shaped with a single lobe behind the toes and two distinct lobes at the rear. In a degraded dog track the back two lobes may be difficult to identify and appear squared off and flat not unlike a cat track; however, the single top lobe is almost always clearly visible and easy to identify.

Something else you can check that will help you differentiate between dog and cat tracks is the shape of the toes and the direction they are facing. Generally, the toes of canid will all point straight ahead. If you can imagine drawing a straight line emanating from the end of each toe you would see four almost parallel lines. By contrast, the toes of a cat will usually appear more splayed. If you drew those same imaginary lines from the toes of a cat track you would get lines that are not close to being parallel with each other. This splaying of the toes also gives most cat tracks a much rounder overall appearance than those of a canid. Generally, dog tracks are longer than they are wide and cat tracks are wider than they are long. Finally, the toe shape can be a give away even if no claw marks are visible in the print. A teardrop shaped toe that comes to a sharp or narrow point is going to be that of a dog. True oval-shaped toes are going to belong to a cat. 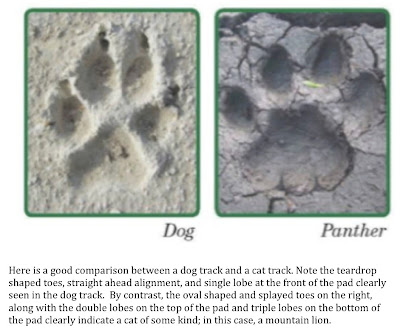 One last indicator is size. A really, really big print is likely that of a large breed domestic dog. The tracks of the Great Pyrenees mentioned in the opening paragraph, for example, were larger than what I would have expected to see even in a cougar track. So, if you come across a really big track it isn’t necessarily time to panic.

I will be the first to admit that I am no expert tracker. The guidelines I’ve touched upon here are just that. There’s more to it than what I’ve discussed (I didn’t touch on differences between front and rear paws, for example). There are going to be times, especially if you find an individual track and not a series of prints, that you just aren’t going to be sure if it is canid or cat in origin. It is important to note that no single characteristic I’ve described will be present in every single track. If, however, you find multiple tracks some or all of the characteristics I’ve discussed should be readily identifiable in at least a few of the prints and allow you to identify the culprit.

I hope that helps. Now, get out and find those cats.

*Not quite a true statement...cheetahs cannot retract their claws. However, if tracking in North America this, obviously, doesn't come into play. Still, thought I would address the inaccuracy of the statement that was pointed out to me by a reader.
Posted by Mike at 1:21 PM