The Killer Vultures of Bell County

Vulture: Any one of several large birds that eat dead animals and have a small featherless head.

I think most would agree with the definition above. Vultures are carrion eaters, nature’s vacuum cleaners. They fill a vital environmental niche. They are all over the state and are seen on an almost daily basis by all but the most urbanized Texans. They can be spotted perched high on power line towers, on the shoulder of roads cleaning up road kill, and riding warm thermals looking for and/or circling a sick or dying animal. Vultures are almost infinitely patient as they wait for their future meal to kick the bucket. How many western movies have featured a cowboy hero struggling for life under a blazing desert sun that looks up to see vultures circling ominously above him just waiting for him to give up the ghost? Vultures will wait and wait and wait... 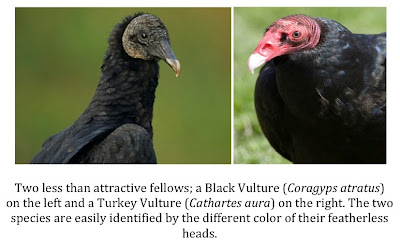 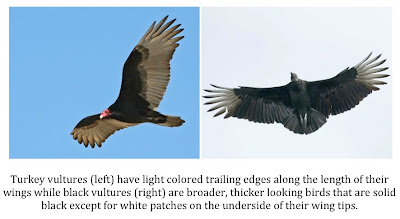 In 2004, the Temple Daily Telegram ran a story about the duties of a Bell County trapper named Gary Silvers. In the article, Silvers detailed something very unusual. Vultures that actually killed live prey. Silvers said in the article that he was initially skeptical of the killer vulture claims being made by ranchers and rural landowners (interestingly, Silvers says he was more skeptical of the killer vulture claims than he was of black panther sightings). The calls and the claims continued to pour in, however, so, his interest piqued, Silvers decided to investigate. What he was able to observe startled him.

Silvers was present on a rural piece of land near Hartrick Bluff when he witnessed a violent vulture attack; the ferocity of which left him stunned. A heifer in the pasture Silvers was observing was giving birth to a calf when a half dozen or more Black Vultures swooped in and attacked. The first arrivals distracted and harassed the heifer long enough for a second group to descend upon the helpless calf.

“The vultures pecked the eyes out first,” said Silvers. “After that it was all over. It was a pretty gruesome scene.”

The black vultures exhibited a flock mentality and ferocity that is not usually associated with the species. So what got into these vultures that turned them from patient scavengers into predatory killers? Silvers also noted the presence of Turkey Vultures in the trees surrounding the pasture where this all took place but they did not take part in the attack. They roosted stoically until the calf was dead.

My interest level in the killer vulture phenomenon jumped up considerably when I found out the attack Gary Silvers observed took place on the property of someone I know. Someone I know quite well, as a matter of fact.

Roy Northen has lived in the Hartrick Bluff area for decades and has just about seen it all. I can personally vouch that he is a man of impeccable character and not prone to exaggeration. In fact, he might be the most understated man I have ever met (To illustrate, Mr. Northen, a rabid University of Texas Longhorn football fan, once described Earl Campbell as a “pretty fair running back.”) Mr. Northen is quoted in a 2007 article written by Clay Coppedge on the Country World website regarding the incident.

“There’s more and more of these new vultures (Black Vultures). The old vultures (Turkey Vultures) would wait for something to die, then they would have a big feast if you let them,” he said. “The new vultures don’t mind at all going after a calf.”

Vulture killings in the area aren’t common but they are no longer rare. Silvers, in the same Country World article, estimated that Bell County ranchers lost between $15,000-$20,000 in 2006 (the year before the article was published). 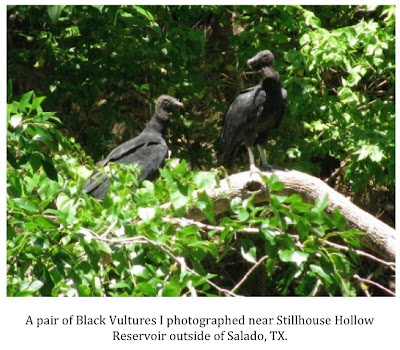 It seems there is little that can be done to curb the predatory vulture issue in Central Texas. It seems you can kill just about any mammal with a standard hunting license but almost all birds are off limits. Black Vultures are no exception. The Migratory Bird Act is the main thorn in the side of those who would like to thin the vulture population a bit. Anyone seeking to kill a vulture must have a Special Purpose Master Migratory Bird Permit issued from the U.S. Fish and Wildlife Department. The permits are not always easy to get. Even those fortunate enough to obtain the permit are severely limited in the number of vultures they are allowed to cull. Based on my own observations of the Central Texas vulture population, far too few birds are taken to actually curb the issue. It is the equivalent of killing ten fire ants after you stir up a nest. It just isn’t enough to do any good.

The articles referenced for this post are several years old but do not make the mistake of thinking that the predatory behavior of Black Vultures in Central Texas has slowed or stopped. Quite the contrary is true. If anything, the behavior has increased. I have heard reports of several young goats being taken by Black Vultures over the last two years. These kids were not newborns either. They were several weeks old and strong enough to follow their mothers about. It is enough to make you wonder about some of the pets that disappear in these parts. Usually, coyotes or bobcats are blamed for such disappearances; sometimes owls are blamed. I would guess that hungry vultures capable of killing a calf are more than capable of taking small pets like cats and dogs.

Why Black Vultures have started to engage in predatory behavior is a mystery. Is it due to the severe drought conditions that have plagued Texas on and off for the last decade? Is it a natural adaptation made necessary by the fact that there are too many vultures and not enough carrion to go around? Nobody seems to have any answers. 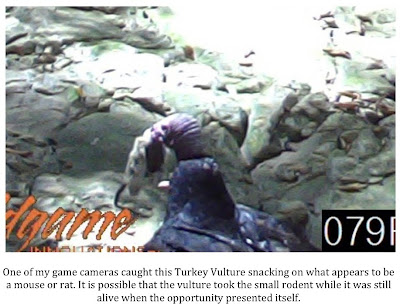 It is true that predatory behavior in vultures is not completely unheard of. There are many, many cases where vultures dig in before the animal on which they are feeding is dead. There are also cases from around the world of vultures being opportunistic and feeding on an unlucky small mammal that wanders too close to a roosting location. The behavior of the Black Vultures in Bell County, however, seems different. These birds are organized and exhibit a brutality that is quite disturbing to witness. While the attacks are no more or less brutal than those undertaken by any other predator, they seem to have a greater effect on those that witness them as they come from a totally unexpected source.

Maybe the predatory behavior of these Black Vultures is anomalous. Maybe the behavior will lessen or stop altogether in the future. I just don’t know. One thing I can tell you, however, is that the “Killer Vultures” of Bell County are a reality. Are they a threat to people? No. Is their existence something to keep in mind when letting your pet out of the house? Yes. Their existence is certainly something that ranchers in the area are dealing with on, at least, a periodic basis.

How long will it be before the rest of us have to do the same?