A couple of years ago I was visiting with my younger brother about the growing problem of Africanized (killer) bees in my part of Central Texas (more on this topic soon). I recall clearly making the comment, “One day insects may just take over and rule the world.” My brother, a rather stoic individual, replied, “What makes you think they don’t already?” 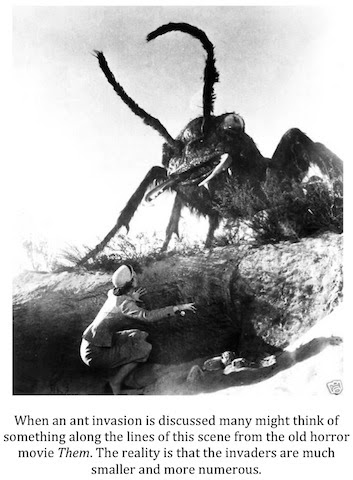 I was reminded of this conversation by a couple of recent news articles regarding the growing problems being caused by invasive “crazy” ants. The tawny crazy ant (Nylanderia fulva) is native to Northern Argentina and Southern Brazil in South America. They’ve been, like many other invasive species, inadvertently transported to the southern U.S. by humans. The ants are tiny; only 1/8 of an inch in length, which allows them to get into nearly anything and everything and they are causing big problems. 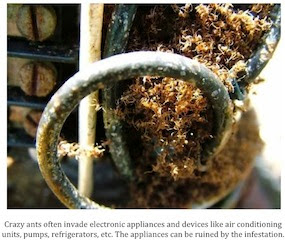 Tawny crazy ants, named thusly due to their herky-jerky manner of locomotion, unlike most other ant species, do not excavate their own holes and tunnels. Because of this they are always looking to move in to existing cavities. Sometimes this means moving into the nests of other ant species. In some areas of Texas the crazies have driven out another invasive; fire ants. This might seem like a good trade as fire ants are largely responsible for a precarious drop in the population of ground nesting birds such as bobwhite quail. Fire ants also pack a powerful sting that nearly every living Texan has had to endure at one time or another. The fact is, however, that while fire ants are pests they pretty much keep to themselves unless disturbed and don’t cause the millions of dollars in damage that crazy ants do. Once they move in, tawny crazy ants will eventually outnumber native ants by a 100-1 ratio. The ecological issues brought about by such an out of whack ratio are probably pretty obvious as different species of ants are responsible for different tasks in nature. Complete domination by one species leaves a void, which means these tasks do not get done.

Crazy ants have now been identified in 21 Texas counties, 20 in Florida, and a handful of counties and/or parishes in Mississippi and Louisiana and they are leaving a trail of expensive destruction in their wake. As mentioned previously, tawny crazy ants do not excavate their own nests and are always on the lookout for a suitable cavity into which they can move. When native ant nests are unavailable, the crazy ants will move into air conditioner units, well pumps, sheds, storage buildings, farm equipment, vehicles, the walls and attics of homes and even cell phones. This has caused a huge problem for Texas industries and homeowners. When crazy ants enter areas that house electronic components their bodies sometimes create connections between electrical contacts which leads the circuits to short out and electrocute ants. When this occurs, the dying ant releases an alarm pheromone that is quickly sensed by the other ants. This alarm is a “we’re under attack” message and a call to come and fight. The brethren of the electrocuted ant come running in huge swarms and the process is repeated in a destructive cycle which leaves appliances broken and full of huge numbers of dead and/or angry ants. It has been estimated that crazy ants were responsible for $146.5 million in damage to electronic components last year alone. 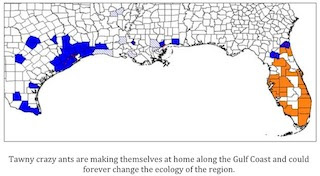 So, why not just call the exterminator? As with many things, it just isn’t that simple. The ants have proven to be resistant to most insecticides and are not partial to any one type of bait. Exterminators have to use a variety of baits and liquid insecticides in order to even put a dent in the population of a crazy ant colony. Tom Rasberry, a Houston area exterminator credited with first identifying the tawny crazy ants in Texas, has had some success by using the insecticide Termidor (fipronil). The problem is that this insecticide is in the form of a poisonous gas and, if used incorrectly, can be deadly to bees, birds, aquatic animals, and other wildlife. It is so toxic that the FDA has restricted its use to “emergency situations” only. As you might guess, the definition of the word emergency varies widely depending on whose property is under siege.

It is likely that crazy ants are here to stay. Hopefully, officials and scientists can work together to figure out a way to control these pests. Control, I fear, is the best that we can hope for at this point. The genie is now out of the bottle. There is no putting it back.