The photo below was sent to television news reporter Hope Ford of KLFY. The picture was allegedly snapped in Iberia Parrish, Louisiana by a woman living near Broussard. The lady claims that the big cat was slinking through her backyard and claims several locals have spotted it as well. 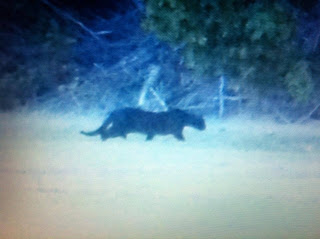 It seems the photo is genuine as the witness has been interviewed by Ford.

I can’t say for sure what this animal is (mountain lion, jaguar, leopard, et al.) but I feel strongly that this is no house cat. This is the most compelling photo of a large black cat that I have seen. While I have to show a little restraint, as there is nothing in the photo to provide scale, the cat’s length, along with other anatomical features, do not look like those of a domestic/feral cat to me.

I’ll attempt to stay on top of this story. You can also check the KLFY website for potential updates.
Posted by Mike at 11:08 AM