A Message From John Green 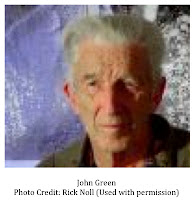 TBRC Chairman Alton Higgins, along with several other well-known figures in the Bigfoot community, received the following email from John Green, legendary researcher and author of "Sasquatch: The Apes Among Us", today. Take a look as it is well worth your time.

"Although it appears to have been overlooked by all media for several years the material presented below will inevitably become one of the greatest news stories of the century.

Sometimes it pays to be not a scientist.

Dr. Aaron Filler, in his 2007 book “The Upright Ape,” presented ample evidence that all higher primates have been bipedal, walking upright on two feet, for over 20 million years.

You don’t have to be a spine surgeon, which Dr. Filler is as well as being a PhD anthropologist, to see that a fossilized lower back vertebrae from an African site dated at 21 million years is almost identical to the corresponding vertebrae of a modern human.

Although there are fossil bones, and fossil footprints, showing that primitive higher primates throughout the ages have walked upright, and there are no fossils that suggest that any were quadrupeds, scientists who have been taught, and teach, that human ancestors invented bipedalism after they came down from the trees and split off from the chimpanzees do not seem able to get the message

In a special edition of Scientific American dated Winter 2013 and titled “What Makes Us Human” none of the 16 authors showed any awareness of Dr. Filler’s book, and several had things to say based on the old mistaken consensus.

But are not chimpanzees quadrupeds? They are plainly trying to be, but they can not really do it because they have the spines of upright animals. With their backs at an angle of about 45% they get around very well using the knuckles of their hands for front feet but they can not ever be normal quadrupeds because their spines do not have the proper attachments to keep them from buckling under load in a horizontal position.

And what Dr. Filler does not say, even though he has presented the facts that establish it, is that there is now no shred of evidence that recent human forbears ever lived in trees.

To quote something that Dr. Filler does say, most eloquently: “In questioning and rejecting scientific orthodoxy, no mass of credentials will convince a spurned scientist that he or she should give way and accept that they have spent a career believing, teaching, and publishing in error.”
------------------

Two thirds of Dr. Filler’s book presents an historical overview and then outlines a new look at the origin of species which will undoubtedly be controversial, but the material regarding the origin of human bipedalism contained in the last two chapters is simple to understand and rock-solidly based on physical evidence.

And an interesting sidelight to the proof that all higher primates have been bipeds:

Until perhaps as recently as 100,000 years ago there lived in China, as established by three fossil lower jaws and a thousand fossil teeth, a giant ape twice the size of a gorilla. Since as a higher primate it must have been upright it matches perfectly the huge, very heavy, manlike footprints which human ingenuity is unable to duplicate, and the immense hair-covered bipeds that thousands of people claim to have seen in Canada and the United States.

It follows that the many people who investigate Bigfoot/Sasquatch reports need to realize that their quarry isn’t likely to be some unknown creature sure to be a close human relative because it walks upright, but a proven animal that lived near the land bridge to North America and that already has a scientific name, Gigantopithecus blacki."