Here’s a story that I missed from a couple of weeks ago.

FoxNews.com is reporting that a Lakeland, Washington woman was mauled by a group of raccoons while walking her dog on Monday July 9th.

Michaela Lee was finishing up a jog with her dog when the pooch spotted a raccoon. The dog pulled free from its leash in order to run after the raccoon. Ms. Lee pursued and was attacked just after she bent down to grab the leash.

“As soon as I went down to grab the leash, three other raccoons came out of the grass and charged straight at me. Before I knew it they were at my legs,” said Lee.

Ms. Lee said she immediately fled but the angry raccoons ran her down after only 20-25 yards. The attack was brief but left Ms. Lee with nearly 100 cuts and 16 deep puncture wounds on her legs, hands, and forearms. She was able to regain her feet once the attacking raccoons relented and get to the safety of a neighbor’s house. No mention was made of where her dog was during this attack. Ms. Lee, according to the report, will be taking a series of rabies shots over the next few weeks. 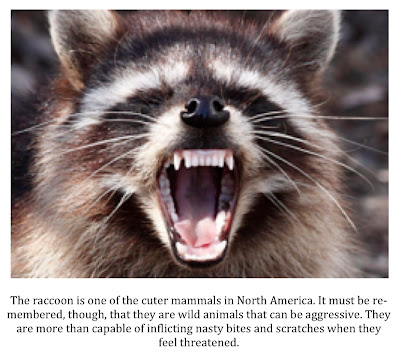 To say this incident is highly unusual would be an understatement. I can’t say I’ve heard of anything quite like it before. I do know that raccoons can be aggressive and ill-tempered at times but have never heard of a group of them attacking en masse. It goes to show that you must always be careful around wildlife, even cute and cuddly looking wildlife.

This report reminds me a bit of an incident I witnessed a few years ago at a restaurant here in town that overlooks Lake Belton. I was attending my wife’s high school reunion at the restaurant. I have to admit to having been a bit bored at this function. I did not attend the same high school as my wife and hardly knew a soul at the reunion. The restaurant has a deck on a bluff overlooking the reservoir and I decided to make my way out there and look at the water. Several other people were on the deck eating appetizers and enjoying some drinks. Three raccoons came ambling out of a brushy area on the far side of the deck and made their way toward a couple seated about 20-ft. from where I was standing. The couple began to toss chips to the masked trio who seemed to enjoy them immensely. I thought that this really wasn’t a very good idea, as sooner or later the couple would run out of chips. Sure enough, the small basket soon was empty and the couple had nothing else to feed to the raccoons. Two of the raccoons seemed to handle this development in stride but the third must have thought the couple was holding out on him and hissed/growled and pulled up on the seated woman’s leg. Needless to say, she flipped out, literally, in this case. The woman pushed away and fell over backward in her chair. Apparently, the commotion startled the raccoon and he ran away instead of pressing the “attack.” I couldn’t help but laugh, which made me even less popular with my wife’s former classmates. Despite the humorous ending to the situation, things could have really taken a nasty turn.

People should never hand feed wild animals. Those signs at Yellowstone saying not to feed the bears are there for a reason. Something bad will eventually occur when a wild animal loses its fear of people and, worse yet, begins to associate humans with food. Raccoons are not nearly as dangerous as bears but they are no less single-minded when it comes to getting what they want. Check the video below out. It features a raccoon relentlessly pursuing a man who I’m guessing tossed the animal some food in order to get it to be still for a photo. The raccoon clearly associates this gentleman with food and wants seconds. While the raccoon does not appear to be overly aggressive it, nonetheless, is not taking no for an answer.

What can we learn from Ms. Lee’s experience? She was not feeding these raccoons or trying to pet them. It is pretty simple. Always, always use caution when in close proximity to wildlife. Keep your eyes and ears open. Retreat when threatened, even by a small animal. No matter how cute and docile an animal may appear to be, do not feed it or attempt to touch it. Never hand feed wild animals. You are teaching them that humans mean food. This will only lead to a bad outcome sometime down the road (most likely for the animal).

A raccoon attack? Just when you think you've heard it all.

*Thanks to my friend Justin Horn who sent me the link to this story.