I have recovered a bit now from my week long excursion into the field in search of evidence that would help officially document the North American wood ape or sasquatch. The trip was very eventful and I will be sharing more specific details on the events that took place at a later date. In the meantime, I thought I’d share some of the highlights.

I’ll start with my two “near death” experiences. Ok, that is a gross exaggeration but two situations, and maybe a third, did arise that could have taken a bad turn. The first incident involved a mountain lion walking into camp. Several of us were sitting around camp about 11:40 p.m. on Sunday 7/15 just visiting a bit. We were keeping an eye on the surrounding woods with some night vision equipment and one thermal unit. My friend with the thermal unit picked up a large heat signature coming over a hill right for us. As you might imagine, this got the old heartbeat going pretty good. As the figure approached, however, he quickly realized he was looking at a big cat. He described it as being three times the length of a gray fox that had been hanging around with a tail that was nearly as long as its body. The mountain lion walked down the hill and within about 30-40 feet of us as it proceeded about its nocturnal business. This is EXTREMELY unusual behavior for a mountain lion and we stayed a bit on edge and on high alert the rest of the evening. A friend of mine had a close-up mountain lion sighting only a few hundred yards from where we were camping a month or so ago. This leads me to believe that this spot is right in the middle of this big cat’s territory. Certainly, the presence of a cougar in the area, and a bold one at that, was something we all kept in the back of our minds all week but we did not see the cat again. 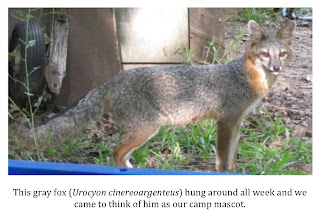 My second scary moment occurred while I was walking a dry creek bed to the south of our camp. I was looking for any sort of sign that might indicate a wood ape was in the vicinity. I stepped over a fallen tree and found myself about five feet from a sunning cottonmouth. The moccasin did not take kindly to my disturbing its sunbath and quickly assumed the “S” position. I froze immediately but this did not seem to help the snake’s mood any. He decided that disturbing a good sunning session was a crime worthy of the death penalty and lunged forward at me. I’m sure the strike didn’t get within three feet of me but it sure felt closer. I was wearing snake guards and a solid pair of hiking boots, but that strike seemed thigh high (haha). I retreated back over the fallen log and the cottonmouth slithered under a large rock. I crossed again, taking a wide berth around that particular rock, and did not see the moccasin again. The cottonmouth has a nasty, nasty reputation, much of it blown way out proportion, but I must say this guy fit the stereotype perfectly. 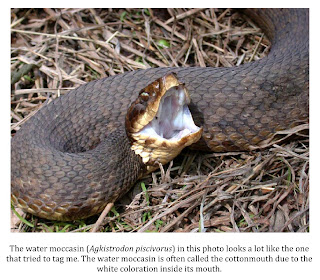 Late in the week we located a large track that I feel could only have been made by a wood ape. The track was about 14” long, 7-8” wide at the ball, and 4-5” wide at the heel. The terrain in this area is very rocky and the soil very thin. The track was located in one of the few spots on this particular trail that would have been capable of taking a track. Due to these factors, the track was not deep at all and, therefore, not suitable for casting. Toes were clearly visible and it looked like what we’ve all come to expect a bigfoot track to look like. Very big, very wide, and with toes that all seemed to be about the same length. Though it is difficult to see in this photo, there seemed to be a bit of a pushup in the middle of the track indicating flexion. This fits in beautifully with Dr. Jeff Meldrum’s theory that these animals have a mid-tarsal joint in their feet. I shot video of the track but am not including that footage here at this time. I have included two stills taken from the video. The first shows only the track while the second is the same still but with some notations made. I realized there is nothing in the photo to provide scale and I have broken my own rule here to some degree as I’ve always felt that anything in a photo needing a red circle around it, an arrow, etc. probably was nothing significant. The full video will be released at a later date and the track appears much clearer in it. 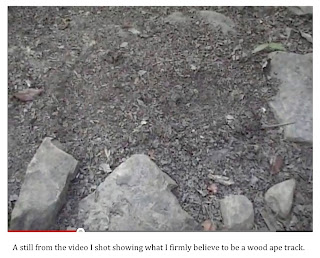 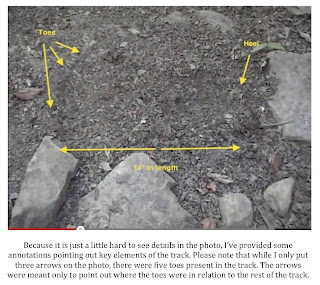 The highlight of the trip for me personally was a brief visual of what I believe to be the very animal I was seeking. I was hiking to a dry creek bed to look for sign (a different tributary than where I met my moccasin friend). My friends and I had decided to spread out a bit and stagger our departures from camp. I was the first one to leave. As I was approaching a heavily wooded area I was stopped in my tracks by a deep growl. It was not long in duration and not unusually loud but the “that’s far enough” message was pretty clear to me. I stopped and saw a dark figure, at about my 2:00 position, moving through the woods away from me. It was late afternoon and the shadows were beginning to get a bit long but I was facing the N-NW so the area was backlit pretty well. The gaps between the trees, leaves, and undergrowth was lit brightly. As the figure moved away from me it blocked out this light allowing me to track it with my eyes. I had the impression it was quite wide. I cannot estimate the height as I could not see a “top” to the figure. The undergrowth was two feet high in most spots and had it been a bear, or any other quadruped I would have seen some light filtering through the vegetation over its back. This was not the case. I could not smell it nor hear it as it made its retreat. It was very dark in color but, as I mentioned, it was backlit by the sun, which could have made the animal appear darker than it really was. I radioed my friends who rushed to the scene. We spread out and proceeded through the woods in the same direction in which the creature retreated. We found nothing and I proceeded to the creek to continue with my original plan. I decided to call it a day shortly before the sun set and started back to camp. I briefly smelled the unmistakable odor of a wood ape on my hike back. I’ve only smelled this odor a few times in two locations (several times in the area in which we were camping this past week and once in the Big Creek Scenic Area of the Sam Houston National Forest). It didn’t last long and I did not have the impression that one was shadowing me. I made it back to camp without incident.

I have no proof to back up my sighting claim. No photo or video. No supporting evidence like a track or broken branches showing a large animal moved through the area. I hope my reputation is good enough that you will afford me the benefit of the doubt. I’m not one of those “researchers” who seems to find a sasquatch behind every tree on every outing. I guess that’s why I don’t have a television show, haha. This is only the second visual I’ve had since 2005. I simply don’t make wild claims.

There is much more to tell about what went on during this trip. A lot of strange and, at times, downright unnerving things occurred during my week in the field. It may have been the most eventful week I’ve ever had in the field. As I mentioned before, a more thorough report on the events of last week will be forthcoming at a later date.