Vampire Bats On Their Way To Texas

A new threat to Texas livestock may be on the way. This predator seeks out mammals in the dead of night as they sleep. This creature drains the blood of its victim and leaves only a small, fairly benign looking, wound behind as the only clue that it was ever there at all. This animal could be coming to Texas in large numbers in the not too distant future according to state biologists. What is this bloodthirsty predator? It isn’t the Chupacabras, if that is what you were thinking. No, the animal I’m talking about is the vampire bat (Desmodus rotundus).

This notorious bat is the only mammal that feeds solely on blood and is native to Mexico, Central and South America. Vampire bats sleep during the daytime hours in total darkness. They prefer to hang upside down from the ceilings of caves and often are found in colonies of about 100 though much larger colonies are not uncommon. They are prolific feeders. According to the National Geographic website, a colony of 100 vampire bats can drink an amount of blood equal to that found in 25 cows in one year. The typical vampire victims are horses and cows but they have been known to feed on humans as well. The bats land on the ground near their sleeping victim and creep up on it on all fours. The bats administer a bite with razor sharp teeth, which causes bleeding. The vampire then laps up the blood for up to 30 minutes (the vampire bat has specialized saliva which prevents the blood from clotting until feeding is complete). While it is true that individual bats do not remove enough blood to kill their victim, the cumulative effect of multiple vampires can be significant. In addition, the bites can lead to nasty infections and diseases such as rabies. Vampire bats are responsible for millions of dollars in losses for Mexican ranchers every year. 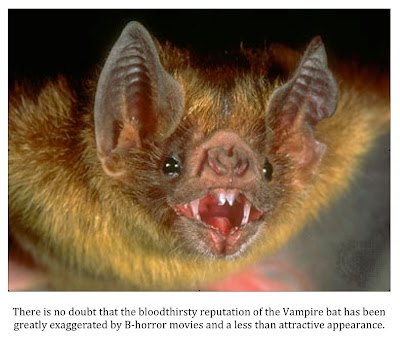 Now, it seems, these bloodthirsty mammals are on their way to Texas.

Texas State University biologist and wildlife disease expert Ivan Castro-Arellano spoke with the Austin American-Statesman and said that if the mild winters Texas has experienced the last few years continue to be the norm, it will be only a matter of time before the vampire bat arrives. While the vampire bat is a non-migratory species, warmer and more hospitable climates year round will allow colonies to expand north into the Lone Star State. Castro-Arellano said that these invasive bats could be here in significant numbers within 50 years if current weather patterns persist. 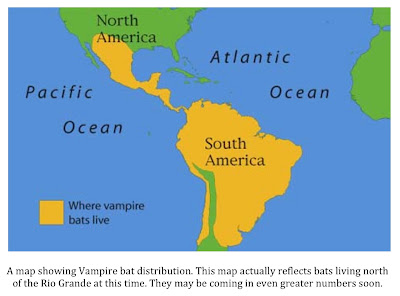 Castro-Arellano is one of more than 40 scientists working in conjunction with the Institute for the Study of Invasive Species in Huntsville trying to decide just what to do about the potential threat vampire bats pose to both the Texas ecosystem and commercial livestock. Texas is something of a bat haven with many species, some native and some invasive, inhabiting the state. Could bat species like the big brown bat, big free-tailed bat, Brazilian free-tailed Bat, California myotis, evening bat, fringed myotis, ghost-faced bat, long-legged myotis, Mexican long-nosed bat, Mexican long-tongued bat, northern myotis, northern yellow bat, pallid bat, among others be adversely affected? Nobody seems quite sure.

While the vampire bat has an undeserved bad reputation, due mostly to bad horror movies, there is little doubt that if they invade Texas in significant numbers they will make a significant environmental and financial impact.