The Killer Whales of the Gulf of Mexico

Eddie Hall couldn’t believe what he was seeing…

Hall is captain of the Shady Lady, a charter fishing vessel out of Alabama. While fishing waters about 90 miles south of the coast, Hall and his crew spotted four separate pods of killer whales (Orcinus orca) feeding on tuna.

“We couldn’t believe what we were looking at right away,” said Captain Hall. “One pod numbered around 75 whales. I think we counted about 200 killer whales that day and I guess it would be an understatement to say that we were surprised."

Hall and his crew knew that few would believe their story. Fortunately, a video camera was aboard and the sighting was documented with high quality footage. Without the footage, Hall’s killer whale sighting would have likely been dismissed as just another fish story (even though killer whales are mammals).

You can view part of the Shady Lady footage below.

Killer whales are actually members of the oceanic dolphin family. These distinctly marked and colored animals are among the most recognizable creatures on the planet. They are massive in size with males typically ranging from 20-26 feet in length while females usually measure between 16-23 feet. The orca is also among the fastest of all marine animals, sometimes reaching swimming speeds of 25-30 knots. They are considered apex predators who have no natural enemies once they reach adulthood.

The killer whale is most commonly associated with cold waters in extremely northern or southern regions. They are common in the northeast Atlantic (near the Norwegian coast), the northwest Pacific (Aleutian Islands), and the waters surrounding Antarctica. While, no doubt, colder climates hold greater numbers of these predators, sightings in more tropical locales are far from unheard of. Sightings in the Mediterranean, Arabian Sea, Indian Ocean, and our own Gulf of Mexico seem to point to the fact that the killer whale can survive in most any oceanic environment. To further point out the adaptability of the species, killer whales have even been seen up to 100 miles inland in various freshwater rivers such as the Columbia in the U.S., Fraser in Canada, and Horikawa in Japan. 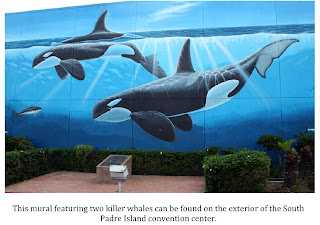 Keith Mullin, a federal biologist who is studying the killer whale population of the Gulf of Mexico says that the idea that these animals do not live in our waters is clearly wrong. Mullin is hopeful his study will help scientists get a firmer grasp on just how many killer whales live in the Gulf. He points out that a 2007 study came to the conclusion that only about 49 killer whales lived permanently in the Gulf of Mexico. The recent footage shot from the deck of the Shady Lady seems to show that number is way off.

“We have no idea exactly how many or how widespread the orca population of the Gulf might be,” Mullin said. “But we’re certain they are out there.”

Some would argue that killer whales are seal eaters and, therefore, would not do well in the Gulf of Mexico. It is true that the Gulf of Mexico has no viable seal population since the demise of the Caribbean monk seal (Monachus tropicalis); however, that is no reason to think killer whales could not still thrive there. Some orcas living year round in the colder regions mentioned above do feed almost exclusively on seals but others, referred to as transients, prefer to roam the open water of the world’s oceans. These whales have actually developed quite a diverse diet which includes sharks, rays, tuna, dolphins, turtles, porpoises, squid, and even other whales. That being the case, there is no reason to believe the rich waters of the Gulf of Mexico could not support a significant population of these animals.

Have killer whales actually been spotted in what would be considered Texas waters? The answer is yes. According to the Mammals of Texas –Online Edition, two separate sightings of orcas have occurred in Texas. No date is listed for either incident but a stranded orca on South Padre Island and a sighting in the waters off Port Aransas are noted. The former incident may have been part of the inspiration for the mural “Orcas off the Gulf of Mexico,” which spans three walls (153 feet in length and 23 feet in height) of the convention center on South Padre Island. In addition, video taken by Captain Scott McCune in February of 2008, shot 80 nautical miles east of Port Aransas, definitively shows a pod of killer whales (this may be the sighting referred to by the Mammals of Texas-Online Edition but I was unable to confirm this).

So, those of you who thought the only killer whales in Texas were those found at Sea World must now reconsider. As federal biologist Keith Mullin stated, “They are here.” We should not be surprised when periodic sightings are reported.

Orcas are big, fast, strong, and beautiful animals. As such, I think they make ideal Texans.

Email ThisBlogThis!Share to TwitterShare to FacebookShare to Pinterest
Labels: Killer whales, Out Of Place Animals