In the mood for an incredible story? Good, because I’ve got a doozy for you.

A 69-year old man from Butte County, California claims to have been attacked by a mountain lion on a recent hiking trip along the Feather River. The story of how this gentleman survived a cougar attack would be an interesting one if that was all there was to it; however, the story of how he was saved from the big cat is really what makes this story unique.

Bob Biggs, a man who says he has been hiking for decades, was trekking along the Feather River when he came across a black bear. Actually, he saw three bears; a sow, her yearling, and a much younger cub. Biggs says he had seen this female twice before. He and the bear made eye contact briefly before he decided to back away and retreat down stream.

Here is where it gets interesting.

Biggs says it was at this point that a mountain lion, that he estimates weighed about 100 lbs., pounced on him. He speculates the lion might have been stalking the bears in the hopes of picking off the smallest cub. 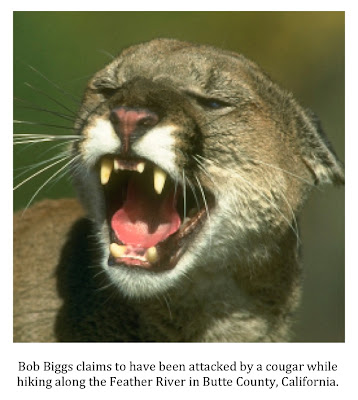 “I got in between it and the cub. When I turned around I think it might have thought I was coming after it,” he said. “I got hit from behind and knocked to my knees. This mountain lion grabs me from the left side of the rear and climbs up on my back and just starts shaking.”

Biggs says he began swinging at the big cat with a rock pick that he was carrying and was prepared for the fight of his life.

“I come around and come swinging, hit it in the side of the head and it screams,” said Biggs.

Even so, the lion refused to stop the attack.

It is at this point that the story veers from interesting to the incredible.

“As I’m coming around (to swing the rock pick a second time) I see something coming from the left and it was the bear grabbing the throat of the mountain lion and it just shook it,” said Biggs.

According to Biggs, the sow bear he had come across moments earlier had come charging to his rescue. He says the bear swatted the cat off of his back and briefly engaged it before the lion ran off. The bear then calmly walked back down to the riverbank and resumed doing what bears do. 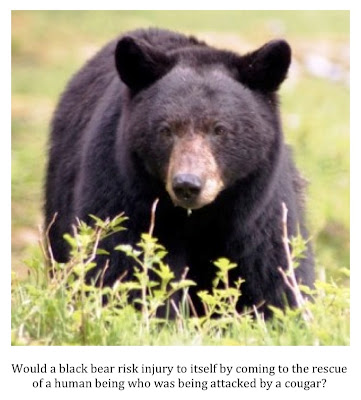 Bob Biggs has shared his story to rather mixed reviews. Some are absolutely amazed by his tale and believe that a bear he had become familiar with acted as his protector.

Others aren’t so sure.

Andrew Hughan, a spokesman for the California Fish and Game Commisssion said, “The evidence right now says inconclusive but he does live in mountain lion country.” He added, “There’s never been a case we can document of one animal attacking another in order to save a person.”

What of Biggs’ theory that the sow bear was taking on the role of protector for a human she had come to know over the course of several months?

“Bears do not have a memory of people,” said Hughan.

The story Bob Biggs tells is truly incredible, maybe too incredible to be believed by most people. I really don’t know what to think about it. I do not believe the assertion of Andrew Hughan that bears are incapable of recognizing humans with which they’ve become familiar. I think that is selling the species short. Now, whether a bear would defend a human just because it was familiar with him is another question all together.

The story is hard to believe. I, however, have become sort of an expert on hard to believe stories. I’ve been in the position of Bob Biggs and have come to realize that not all amazing stories are hoaxes.For his part, Bob Biggs is standing by his story and insists he isn't lying about his encounter.

Is he telling the truth? Only he knows for sure.