Oklahoma City television station KFOR is reporting that people living in Pocasset are on the hunt for what they are calling a black panther or mountain lion that has been seen several times and has allegedly been preying on livestock. See their report below.

Russell Dahl claims to have seen the big cat and said, “It was about half grown, had a tail about 4 feet long and it was solid black.”

Dahl claims a female neighbor encountered the creature while out on for a run.

“It liked to scared her to death,” he said.

Dahl, himself, did not believe the stories of a black panther in the vicinity initially, not even after his own son spotted the animal; however, he quickly changed his mind once he got a look at the big cat for himself the very next day. 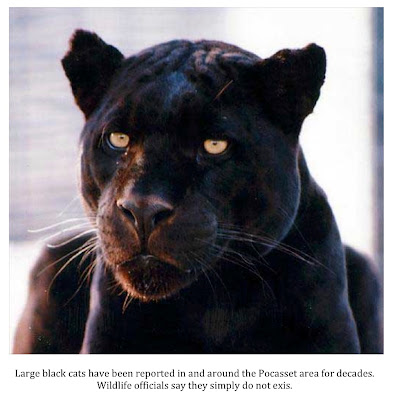 Oklahoma State Department of Wildlife officials are very skeptical of sightings of this large black cat and seem to be attributing it to a sort of mass hysteria following the capture of a cougar in Tulsa last week. A cougar that, predictably enough, is being called an escaped pet.

“Sometimes I think they might be seeing a bobcat, maybe even coyotes, once in a while dogs,” Game Warden Ron Comer said. “You can’t always believe what your eyes are telling you.”

Game Warden Comer went on to add, “I never try to tell anybody that they didn’t see what they thought they saw but the melanistic gene does not exist in the mountain lion or the pumas or panthers or whatever you want to call the North American big cat.” 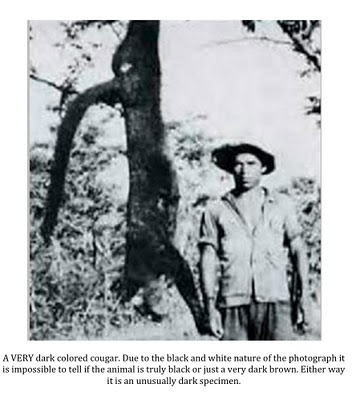 So, once again the people who live and work in a rural area and know the land and the creatures that roam it best are being told they are mistaken. The quote from Game Warden Comer saying that, “You can’t always believe what your eyes are telling you,” has to be terribly insulting to those who claim to have seen this animal. Again, instead of investigating and possibly spending time in the area where the sightings are being reported, officials are just blowing the whole thing off as nonsense and treating those who say they’ve seen this large black cat as simpletons or bumpkins. The fact that residents have been reporting sightings of large black cats for decades in and around Pocasset means little, I suppose.

Frustrating…
Posted by Mike at 1:20 PM