Things have been pretty quiet on the Ivory-billed woodpecker front of late. The excitement of the Cornell University expedition into the Big Woods area of Arkansas has died down and the disgust over the whole Daniel Rainsong saga has abated. It does seem, however, that there have been some things going on quietly behind the scenes. An article by John Fleming on The Anniston Star website tells the story of Auburn Professor Geoff Hill and his experiences searching for the Ivory-billed woodpecker. You can read the article in its entirety here but I will give you the gist of it below.

Geoff Hill, a professor of ornithology, knows he saw an Ivory-billed woodpecker on several occasions back in 2005 and 2006 while researching in the swamps and marshes of the Florida Panhandle. His team, accomplished birders all, reported at least 14 sightings of their own. The team also compiled hundreds of recordings of the distinctive call the Ivory-billed woodpecker is known to have made. You would think these sightings and recordings would have the birding world bouncing off the walls in excitement.You would be wrong.

“It proves nothing,” Hill said. 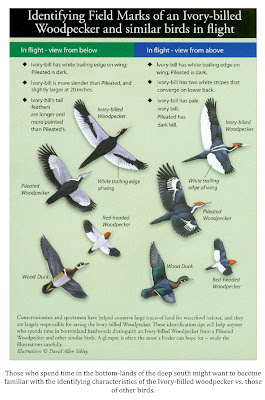 Hill also has a video clip shot during that time in Florida that he says features a living Ivory-billed woodpecker. He says the clip is short and the resolution is not great. He does mention that you can hear one of his grad students, Brian Rolek, say, “Ivory-bill,” on the video. In the next breath, however, Hill dismisses the video as not being good enough to provide the concrete proof needed by science to conclusively show that this ghost bird still exists. He is convinced the Ivory-bill still lives but knowing it and proving it are very different things.

Professor Hill’s team had to cease operations once funding ran out in 2006; however, another group traveled to Florida in 2008 to look for the largest of all woodpeckers and Holy Grail of the ornithological world. The group included wildlife artist John Agnew who reported the following:

“About a hundred yards to the west of me, some pileated woodpeckers were making a racket, apparently involved in a territorial dispute. It was then that I saw a large dark woodpecker flying towards me from their direction. It landed on the far side of a cypress about 20 yards away. I thought that I might as well practice my photographic technique on this pileated woodpecker, and was raising the camera (a Nikon D80 with a 300mm lens) to focus when it took off and flew directly towards me. There would not be time to get the camera ready, so I just watched this magnificent bird fly. When it was about 15 feet overhead and nearly at my position, I realized that something was different. My eyes were drawn towards the brilliant white secondary feathers, their edges glowing in the morning sun. My subconscious mind was telling me that this was no pileated, but no alarm bells were ringing. I noted the red crest and a white stripe on the side of the head. The bird flew past me, and by the time I got the kayak turned around, it had gone on downstream. I sat a moment digesting what I had seen.” 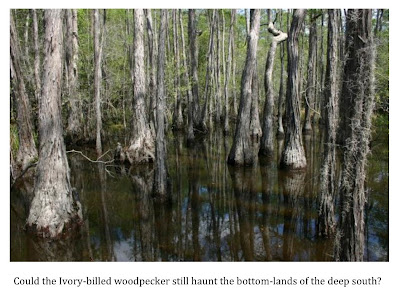 Geoff Hill remains a man conflicted. He is sure the Ivory-billed woodpecker still exists but afraid that the will to find it has gone. Too many regard funds spent on the search for the ghost bird to be a waste of money that could be better spent trying to preserve species that are in trouble but science knows still exist. In addition,the disappointment that has followed other promising leads has left a bad taste in the mouths of many. Hill understands these things well.

Still, Geoff Hill does not have a defeatist attitude. He remains realistically hopeful. This hope if fueled, in part, by one compelling photograph. During their research, Hill's team mounted game cameras in the forest pointing at suspected Ivory-billed woodpecker haunts. Over 7 million images, most of squirrels and small birds, including other woodpecker species, were captured. All of the pictures featured easily identifiable animals…except for one. It is this photo that continues to stoke his hope for the Ivory-billed woodpecker.

“Well, look at it,” Hill told the reporter Fleming while pointing at the image on his computer screen. “What is that? I don’t know, could be an Ivory-bill, could be a cormorant, could be herons. It’s like an inkblot. It gets us nowhere.” Still, he returns to the image over and over. 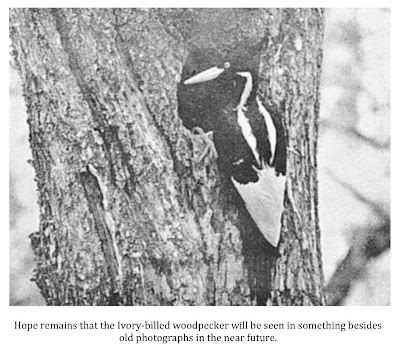 After reading the article, I felt that Geoff Hill’s hope was almost tangible. He is being very professional and measured in what he says as he realizes the evidence he has is not sufficient to prove this woodpecker still lives. Too, he has great regard for both Agnew and Wolliver and does not doubt that they saw an Ivory-billed woodpecker... maybe the last one on earth. But...

Believing it, knowing it, being able to prove it. It always comes back to that.

The article ends with Professor Hill repeating a by now familiar refrain.