Below is an article written by my good friends, and fellow TBRC members, Daryl Colyer and Alton Higgins regarding the surprising wariness of coyotes around game cameras and how this trait might cause us to rethink how we attempt to go about getting a photo of other elusive and/or rare animals like the sasquatch. It is good stuff. I hope you enjoy it.

By Alton Higgins and Daryl Colyer

Since April 2006 the TBRC has maintained camera traps placed in areas noted for sasquatch activity. Our stated hypothesis was that sasquatches could not know what cameras were and should have no more reason to avoid them than any other species. The fact that dogged scientific research efforts the world over were experiencing success in documenting endangered animals served to encourage confidence in the strategy, despite the overwhelming odds when considering the vastness of the habitat and the probable rarity of the target species.

The cameras were placed in as close to wilderness conditions as it is possible to find in East Texas and the Ouachita Mountains of Arkansas and Oklahoma, and six months or more often passed between visits to the long-life units. As photos accumulated into the thousands, TBRC researchers noted what seemed to be an odd fact: one of the most abundant large species, the coyote (Canis latrans), was represented in just a tiny fraction of the pictures, less than one half of one percent. Baiting the traps with scent lures did not make a difference. Then, in the early part of this year, we ran across a journal article addressing this very issue which gave us considerable cause to reevaluate and reconsider our hypothesis regarding the plausibility of cognitive camera-trap avoidance by sasquatches. Succinctly, we no longer rule out the possibility that the sasquatch purposely avoids camera-traps in remote wilderness environments. 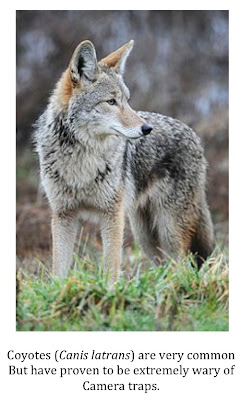 Animals living in the Nature Conservancy’s Dye Creek Preserve, located in the foothills of the Cascade Range in California, were studied to better understand coyote wariness. The preserve was closed to the public and, as described by the authors, “Coyotes on the preserve were not hunted and generally represented an unexploited population.” Remarkably, results indicated that the dominant coyotes, the alphas, were never photographed inside their territories during the three-year study. This was not the result of animal departures; Alphas continued to stay in their territories while avoiding the cameras. Betas and transient coyotes—thirty-eight individuals in all—were successfully photo-captured.

The authors noted that, “Alphas are probably the only coyotes that are truly territorial in terms of defending and fully exploiting their space.” They regularly traverse their entire territories. These animals “actively tracked human activity within their territories and presumably gained information about camera stations as they were being set up.” They “were cautious of camera stations because of their association with humans and not simply because they were novel.” Such observations and the related data oblige us to reconsider our views regarding the predicted apathy of sasquatches to camera traps.

The TBRC mission does not include photographing coyotes; we are after a much more elusive animal. Regardless of the opinion one may favor regarding the cognitive capabilities of sasquatches, it stands to reason that if certain coyotes living in near pristine environments exhibit an innate aversion to human objects, then it is indeed conceivable that Operation Forest Vigil camera traps, placed as they are in exposed positions, may be thwarting the documentation of more than just coyotes.
This kind of avoidance behavior may not be characteristic of the sasquatch, but it represents a biologically feasible problem, and it is one that can be addressed. Revisiting feasible camera placement strategies may only shift the odds for success by a fraction, but every potential advantage, no matter how small, should be pursued. 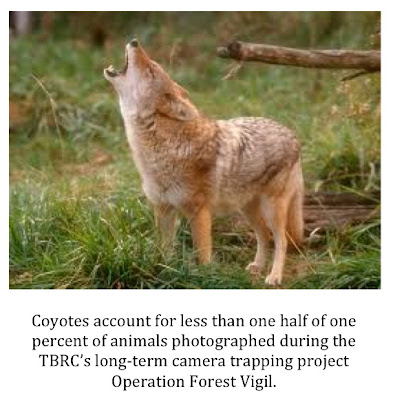 One of the difficulties faced by the TBRC’s Operation Forest Vigil camera teams is presented by the American black bear (Ursus americanus). Unlike coyotes, black bears exhibit great interest in deployed camera traps, as discussed in the Camera Trap Vandals article available at the TBRC web site. After suffering the loss of thousands of dollars worth of equipment, the TBRC was forced to employ customized heavy-duty steel protective boxes for each of the cameras. In addition to making the deployment of cameras in remote areas much more labor intensive, the added security equipment made the units even more visually conspicuous. Of course, this was not seen as a research impediment at the time. However, with regard to the possibility that prominent camera trap setups might serve to ward off wary species in wilderness settings, this represents an obvious challenge.

Because of the incredibly acute olfactory abilities of bears, simply hiding camera traps without the bulky protective steel boxes is not seen as a practical option. However, it may be possible to redesign the boxes to be more compact and to attach to trees with lag bolts, a course of action the TBRC is currently pursuing.
Smaller camera traps would facilitate concealment. Most of the cameras used by the TBRC are made by Reconyx. While Reconyx makes the most highly rated game cameras on the market, they are not particularly compact. Comparative research of the capabilities of Reconyx with some of the smaller brands now available, perhaps in side-by-side field trials, needs to be conducted. 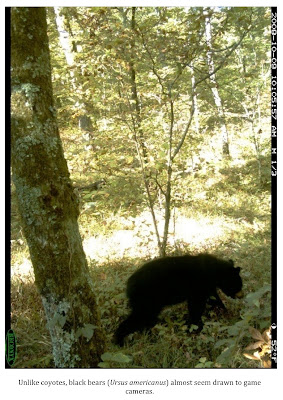 Based on the experiences of the scientists studying coyote wariness, camera traps should be deployed as quickly and quietly as possible. When combined with the need for protection from bear damage, this is no easy task. Safe and secure does not go hand in hand with quick and quiet. Regular relocation of cameras may also be a strategy to consider employing. If the activities of camera placement/maintenance teams are detected by resident animals, the camera may be rendered essentially ineffective at that location.

Short of placing cameras inside of trees or camouflaging with natural materials such as bark, which would probably be torn off by inquisitive bears, the protective camera boxes need to be camouflaged in ways that are compatible with the bark of native trees. Ideally, sharp edges and angles could be replaced with more natural looking rounded angles and sloping sides to better blend in with the contours of tree trunks. Another possibility would be to deploy camera traps in the ground or in rocks. Even placement of small trees with camera traps housed in them might make for an undetectable setup.

Some of these actions can be implemented more quickly than others. Even if the sasquatch is indifferent towards game cameras, these changes would make the deployment of cameras faster and easier, while further reducing the chances of losing expensive equipment in the event that units are discovered by people. Having said that, it does seem reasonable to proffer that if we can significantly increase our photo-captures of coyotes—with a likely continental population into the millions—then we can enhance our odds of photo-capturing the sasquatch, which many argue has a population of a few thousand at best.

*Originally posted on the TBRC website and reproduced here with permission.