I saw a photograph on the National Geographic website recently that I found quite interesting. The photograph was taken by Monica Szczupider and shows a group of chimpanzees watching from behind a fence as one of their own, who had recently died, was being wheeled away to be buried. 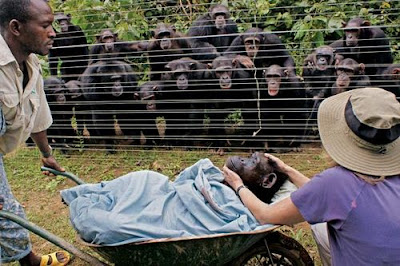 The dead chimp was named Dorothy and was quite a popular and beloved figure among the other chimps at the Sanaga-Yong Chimpanzee Rescue Center in Cameroon. Dorothy had been rescued eight years prior and had become a maternal figure to the troupe of chimps housed at the center which rehabilitates apes victimized by loss of habitat and the illegal bush meat trade. According to Szczupider, "As Dorothy's health improved her deep kindness surfaced. She mothered an orphaned chimp named Bouboule and became a close friend to many others, including Jacky, the group's alpha male." She added, "Her presence, and loss, was palpable, and resonated throughout the group. The management at Sanaga-Yong opted to let Dorothy's chimpanzee family witness her burial, so that perhaps they would understand, in their own capacity, that Dorothy would not return. Some chimps displayed aggression while others barked in frustration. But perhaps the most stunning reaction was a recurring, almost tangible, silence. If one knows chimpanzees, then one knows that they are not usually silent creatures."

I try very hard not to "humanize" animals and assign characteristics and emotional capacities beyond their capabilities. However, the more I look at the great apes, the more I begin to wonder just where their "limits" lie. It is impossible to look at this photograph and not sense that this group of chimps was experiencing feelings of grief and sadness. We have learned a lot about the great apes over the last couple of years. Some of these discoveries are detailed in the Great Ape Behavioral Parallel Series of articles I have been working on the last few months. With each new discovery we seem to find that these creatures are capable of much more than was ever thought possible. Maybe emotions like love, grief, loss, and sadness are not beyond them after all.

We who are actively trying to prove the existence of the sasquatch are often asked, "Why are they so hard to find?" The answer may be far simpler than most suspect. If the sasquatch is a great ape that makes it, by default, an amazingly intelligent creature. If, as I suspect, it turns out to be the most intelligent of the great apes then that may be all the explanation necessary to explain why these incredible creatures are so hard to locate and pattern.
Posted by Mike at 10:09 PM