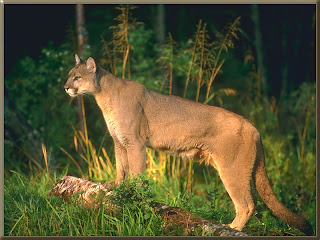 A reader sent me an email a little while back detailing a sighting of a large cat in the Lewisville/Flower Mound area recently. His email, minus some details that might have compromised his identity, is below.

Good morning! I personally have seen a large cat in my neighborhood in Flower Mound.

I have dogs, so I am 100% sure that it was not a dog. The body structure was not a dog, and it ran completely different. It size was roughly the same as my lab/rhodesian mix. I cannot say that it was black. It appeared to be light colored, but it was at night. I live near Timbercreek. I have seen a coyote in broad daylight in my neighborhood.

When the large cat crossed me the first time, it was coming from the right side of Timbercreek Road. The area has homes but it has a group of homes with acreage and most have horses. I know at least one also has chickens.

On the other side of Timbercreek Road is the creek. It is heavily wooded.

I am not sure if you have received any other feedback regarding the large cat in the area. I did find it interesting that your reader lives in Lewisville and had an experience at night as well. I live right on the border of Lewisville and Flower Mound.


The Texas Parks & Wildlife, as well as most wildlife biologists, scoff at the notion of large cats, like the cougar, living in such close proximity to a large urban area like Dallas-Fort Worth. Sightings continue to be reported from surprisingly populated areas.

I would encourage people living near riparian areas or on the outskirts of urban areas where big cats have been reported to keep a camera handy. It is going to take some pretty strong photographic evidence to convince the authorities that these cats have become acclimated to semi-urban living.
Posted by Mike at 12:47 PM