What Lurked Near the Banks of The River of Doubt?

Most people who are interested in cryptozoology, and in particular bigfoot, are familiar with one of President Theodore Roosevelt’s favorite campfire stories. I am referring, of course, to the story of the two trappers who encountered a vicious beast of some kind in what is now Idaho. A beast with a strong odor and that, seemingly, walked on two feet. One of the trappers was allegedly killed by the beast, while the other, a man named Bauman, left the area never to return. According to Roosevelt’s telling, published in his 1893 book The Wilderness Hunter, Bauman himself related the experience to the future president. It is an interesting story and it isn’t hard to imagine Roosevelt telling and embellishing this tale to his hunting buddies while sitting around a roaring campfire. You can read the story here. While the Bauman story is considered a classic in the annals of sasquatch lore, this post deals with another tale involving Roosevelt. 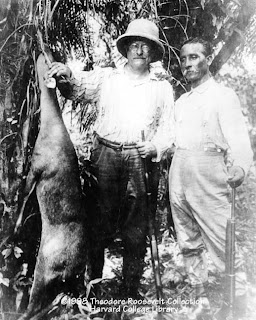 I am currently reading Theodore Roosevelt’s Darkest Journey : The River of Doubt by Candice Millard. The book chronicles one of Roosevelt’s greatest, and most dangerous, adventures. After his unsuccessful bid for a third term as president ended in defeat in 1912, Roosevelt threw himself back into exploration and adventure. His mission was to explore, survey, and put on the map an unknown tributary of the mighty Amazon River. Absolutely nothing was known of this river and thus it was simply called The River of Doubt. It was on this journey that incidents were documented that sound very much like the wood- knocking phenomenon discussed here previously. In addition to the wood-knocks, terrible screams and shrieks were also heard by Roosevelt and his men. Neither the camaradas, or the Brazilian co-commander of the expedition, Colonel Candido Rondon, who knew the sounds of the jungle well, could identify the terrifying and, to them inexplicable, sounds. Millard refers to the account of British naturalist Henry Walter Bates, who had explored the Amazonian rainforest 50 years prior to Roosevelt’s expedition, in an attempt to describe what the men on this daring adventure heard in the dark jungles along the banks of The River of Doubt. A small excerpt is printed below:

Worse even than the noises they could recognize were those that none of them could explain. These strange sounds, which disappeared as suddenly as they came and were a mystery even to those who knew the rain forest best, had made a strong impression on British naturalist Henry Walter Bates. “Often, even in the still hours of midday, a sudden crash will be heard resounding afar through the wilderness, as some great bough or entire tree falls to the ground,” the naturalist wrote. “There are, besides, many sounds which it is impossible to account for. I found the natives generally as much at a loss in this respect as myself. Sometimes a sound is heard like the clang of an iron bar against a hard, hollow tree, or a piercing cry rends the air; these are not repeated, and the succeeding silence tends to heighten the unpleasant impression which they make on the mind.”

In addition to the strange sounds it was noted that the forest would sometimes go completely silent when the maker of these strange cries and knocks was in the vicinity. This, again, is something we have heard from alleged sasquatch witnesses. Veteran outdoorsman George Cherrie, of the American Museum of Natural History, and a specimen collector on the Roosevelt expedition, noted how the screams, crashes, clangs, and cries of the forest seemed to terrify the other more common animals of the jungle. This was perhaps the most disturbing thing about the noises to the members of the expedition. Cherrie wrote, “Let there be the least break in the harmony of sound and instantly there succeeds a deathlike silence, while all living things wait in dread for the inevitable shriek that follows the night prowler’s stealthy spring.” While the great hunter and adventurer, Roosevelt, feared little, even he admitted to trepidation and a sinking feeling when darkness descended and the strange maker of the screams and other noises was in the area. 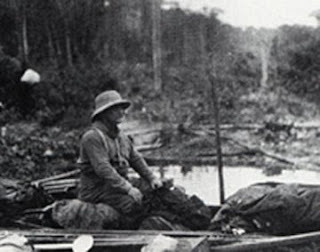 While the words above were not Roosevelt’s, they described closely sounds he, and the rest of the men heard many times during the rainy season of 1914. The words used by Bates to describe what he heard sound startlingly like descriptors used by hunters, campers, hikers, and naturalists in North America who have heard knocks, clangs, howls, and screams they cannot attribute to any known animal. Certainly there is absolutely no proof that what Theodore Roosevelt heard in the wilds of the Amazonian rain forest could be attributed to South America’s version of the sasquatch. Similarly, it has yet to be proven that wood knocking and strange howls and screams heard in the deep woods of North America are attributable to the sasquatch. I simply found the parallels between Roosevelt’s experiences, my own experiences, and those of many people I’ve met interesting.

It is argued by many that auditory reports aren't worth very much. After all, people are not sent to prison by "ear" witness testimony. Also, it would be pretty arrogant to assume we know all the sounds documented animals make. Therefore, it may be more logical to assume a known animal is responsible for these strange knocks. Until someone sees and videos a sasquatch making these wood-knocking sounds it remains pure speculation, despite a growing body of circumstantial evidence, that an undocumented primate is responsible for them. The screams and howls, in my opinion, are more problematic to explain as a known animal. At times the sheer volume, and the lung capacity needed to produce it, would seem to eliminate known species. However, again, there is no definitive proof that the sasquatch is responsible for these howls and screams. These phenomena are just tantalizing tidbits at the moment. It is my hope, however, that these strange howls, knocks, clangs, etc. will one day help lead us to the zoological discovery of our lifetime.

So, what did Theodore Roosevelt hear in the Amazonian rain forest in 1914? I have no idea. The interesting thing is that neither did he. 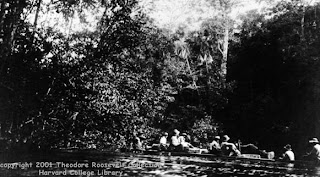