The Missionary, the Former Slave, and the Sasquatch

What do an eighteenth-century Jesuit missionary and a former slave from the state of Arkansas have in common? I hate to disappoint any of you that thought this might be the opening line to a bad joke, it is actually a legitimate question. Read on for the answer.

In my mind, some of the strongest sources of anecdotal evidence regarding the existence of the sasquatch are those that pre-date the coining of the term bigfoot in an article about a catskinner named Jerry Crew - who found massive human-like tracks around his road-building equipment in California’s Six Rivers National Forest in August of 1958 - and the explosion of the Patterson-Gimlin footage on the world stage in October of 1967. Sightings reported before these two seminal events cannot be dismissed as the work of hoaxers seeking to hop on the bigfoot bandwagon. The sasquatch was all but unknown to the Europeans who began flooding the North and South American continents in the 1500s…and to the slaves that they brought with them. Their accounts of bipedal, hair-covered creatures simply cannot be dismissed out of hand.

I would like to discuss here two such historical sightings. The incidents are not well-known, but they may well be extremely important when attempting to trace just how far back sightings of wood apes might go. The similarity between these two accounts cannot be denied and both lend credibility to the opinion of those who believe the animal commonly referred to as bigfoot was being seen well before the 1950s by people of different cultural backgrounds living many miles apart. 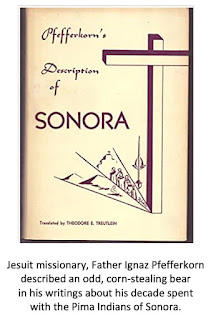 The first incident comes directly from the writings of a Jesuit missionary who worked among the people of the province of Sonora, Mexico – a region that stretched up from northwest Mexico to the Sierra Madre from Cjeme (now Ciudad Obregon), near the California coast, to Tuscon - in the eighteenth-century. Father Ignaz Pfefferkorn (b. 1725), a German Jesuit lived and worked among the Pima Indians from 1756 to 1767. Details of his work and life among these people can be found in his Descripcion de la Provincia de Sonora. The diaries, journals, and logs of missionaries have long been highly valued by anthropologists and historians. Pfefferkorn’s work was no different and he is considered by academics to have been an extremely reliable and credible observer. His writings continue to be cited by historians to this day. Among Pfefferkorn’s writings were descriptions of the local wildlife. Among the descriptions of what would be considered common animals, the good father wrote about the different bears (differentiated by their color) found in the region. He wrote:

“Of the Sonora bears some have black hair, others dark gray, and the smallest number are a reddish color. These last are the most cruel and harmful, according to the statements of herdsmen.”

Only two species of bear are known to have ever lived in the Province of Sonora during the eighteenth-century. The black bear (Ursus americanus) and the grizzly (Ursus arctos horribilis) both made Sonora part of their home range during the time in question. While black bears can be black, blonde, or reddish, it is likely the cinnamon-colored bears that were “the most cruel and harmful” were grizzlies. While these grizzlies were likely the animals most often responsible for the killing of livestock in the region, some of the other activities attributed to them may well have been the work of something else.

Pfefferkorn, while documenting bear activity related to him by the indigenous tribesmen, in some cases may have actually been recording accounts of bigfoot interaction with humans. If so, his accounts are some of the earliest ever written down in North America. One intriguing passage is below:

“Bears are a special menace to stock raising, for they eat many a calf, and, if no smaller prey falls into their clutches, they will attack even horses, cows, and oxen. They delight especially in eating maize as long as it is still tender and soft. Woe to the field if a hungry bear breaks into it at night. He eats as much as he can and makes off with as much as he can grasp and carry in his mighty arms. In so doing he ruins even more of the field by breaking it down and treading upon it. The inhabitants assert that a bear defends himself by throwing stones when one attempts to chase him away and that a stone hurled from his paws comes with much greater force than one thrown from the hand of the strongest man.”

I do not think I have to tell anyone that a bear cannot throw stones; nor is it capable of walking bipedally in order to carry off large amounts of corn in its “mighty arms.” Pfefferkorn was familiar with bears. He had traveled across the region for many years and had seen many bruins. Pfefferkorn even witnessed a grizzly kill his Indian guide on one trip across Sonora (the guide had attempted to kill the bear, succeeded only in wounding it, and paid the ultimate price when the animal turned on its tormentor). This being the case, it is strange that Pfefferkorn would attribute rock-throwing and the ability to carry large amounts of corn away while walking on two legs to grizzlies. I think it is entirely possible that the stone-hurling, corn-stealing, bipedal “bears” of Sonora might have actually been wood apes.

A strikingly similar account comes from another historical source: a former Arkansas slave. Doc Quinn was one of the oldest living residents of Miller County, Arkansas (yes, the same Miller County that would become known as the home of the Fouke Monster of The Legend of Boggy Creek fame) when he was interviewed by Cecil Copeland at his home in Texarkana in the 1930s. Doc recalled when he was first brought to the plantation of one Colonel Ogburn – between Index and Fulton on the Red River - that there was a section of the property dominated by an immense canebrake. This canebrake was a favorite retreat of bears and other wild animals. It was all but impossible to go in after problem bears that would steal out of the thicket at night and take livestock, so the plantation owner had the slaves round up the hogs and animals and place them in pens at the end of the day. Several slaves were charged with standing guard at night over the domesticated animals. The efforts of the slaves helped somewhat, but bears were still seen often and some of their actions “were almost human.” The following is a passage taken from the book Bearing Witness: Memories of Arkansas Slavery Narratives from the 1930s WPA Collection in which Doc Quinn describes to Cecil Copeland the odd behavior of a “bear” he came across in a cornfield one day:

“The bear picked off an ear of corn and put it in his bended arm. He repeated this action until he had an armful, and then waddled over to the fence. Standing by the fence, he carefully threw the corn on the other side, ear by ear. The bear then climbed the fence, much in the same manner of a human being, retrieved the corn, and went on his way.”

Sounds familiar, does it not? The simple truth is that bears cannot stroll around in a bipedal fashion while plucking ears of corn from stalks in the field with one front paw and place them into the crook of their other front “arm.” The description of how Quinn witnessed this animal climb a fence “in the same manner of a human being” is fascinating. The entire incident simply does not describe bear behavior in any form or fashion. 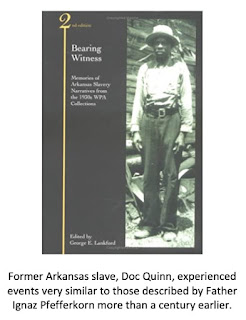 Quinn provides another interesting anecdote in the same interview. I thought long and hard about including it here, not because it is not interesting (it is), but because Doc Quinn’s words are transcribed in such a way that his dialect is evident. Some hot-button words, including the n-word, are used. After wrestling with it for a while, I decided to include the account here with only one minor edit (I decided not to type the n-word out. I fear in today’s climate, I would be accused of approving of it or some such thing). Again, I would remind readers these are not my words. These are the words spoken by former Arkansas slave, Doc Quinn and transcribed by his interviewer, Cecil Copeland. The text comes straight from the book previously mentioned. Try to focus on the story Doc Quinn is telling and not the language and terminology he uses. The account is as follows:

“Late one ebenin’, me an’ anudder (edit) named Jerry wuz comin’ home frum fishin’. Roundin’ a bend in de trail, whut do we meet almos’ face to face? – A great big ol’ bar! Bein’ young, and blessed wid swif’ feet, I makes fo’ de nearest tree, and hastily scrambles to safety. Not so wid mah fat frien’. Peerin’ outen thru de branches ob de tree, I sees de bar makin’ fo’ Jerry, an’ I says to mahself: ‘ Jerry, yo’ sins has sho’ kotched up wid yo’ dis time.’ But Jerry, allus bein’ a mean (edit), mus’ hab had de debbil by he side. Pullin’ outen his Bowie knife, dat (edit) jumps to one side as de bar kum chargin’ pas’, and’ stab it in de side, near de shoulder. As de bar started toinin’ roun’ to make annuder lunge at de (edit) he notice de blood spurtin’ frum de shoulder. An’ whut do yo’ think happen’? Dat ole bar forgets all about Jerry. Hastily scramblin’ aroun’, he begins to pick up leaves, an trash an’ clamps dem on de wound, tryin’ to keep frum bleedin’ to deaf. Yo’ ax did de bar die? Well, suh, I didn’ wait to see de result. Jerry, he done lef’ dem parts, an’ not wantin’ to stay up in dat tree alnight by mahself, I scrambles down an’ run fo’ mile home in double quick time!”

I ask you, what kind of bear notices it is bleeding, stops in the middle of an altercation, begins gathering leaves, and then packs its own wound? I will tell you the answer. None. No bear behaves in this manner. If Doc Quinn is not spinning a yarn to his interviewer, the creature his fishing partner, Jerry, tangled with was certainly no bear. Was it an aggressive sasquatch? Certainly, the location was right as the aggressive nature of the Fouke Monster would be well documented some years later. There is a real shortage of viable alternatives if the creature in question was not a bear.

The parallels between these two accounts – accounts separated by more than a century and approximately 1,400 miles – are uncanny. Bears cannot and do not gather up corn in their “arms” and walk away with it in a bipedal fashion. Yet, a Jesuit missionary and a former Arkansas slave describe observing this same behavior. Doc Quinn’s account of how his fishing partner, Jerry, tangled with an animal that packed its own wound after being stabbed lends credence to the theory that something other than a bear was roaming about Miller County, Arkansas in his youth. Is it possible that these two men from very different worlds - Father Ignaz Pfefferkorn and former slave Doc Quinn - described the same type of animal? An animal they had no name for? An animal that just might have been a wood ape?

*Special thanks to NAWAC Chairman Emeritus, Alton Higgins, who authored the article, “A Sonoran Sasquatch,” that I drew heavily from for this post.

Brown, D. E. (1996). The Grizzly in the Southwest: Documentary of an Extinction. Norman, OK: University of Oklahoma Press.

Pfefferkorn, I., Treutlein, T. E., & Pfefferkorn, I. (1949). Sonora A Description of the Province. Albuquerque: University of New Mexico Press.