KWTX, a CBS affiliate in Central Texas is reporting that a Dallas area man has been hospitalized as the result of an attack by bees. The story is brief so I will post it in its entirety below.

DALLAS (October 8, 2014) A man who was attacked by a swarm of bees while mowing near a self-storage facility in Hearne was flown to a hospital in Bryan.
The bees attacked the man late Tuesday morning, authorities said.
Firefighters were able to get the bees away by hosing the man down with soap and water.
Authorities diverted traffic away from the area for about an hour-and-a-half.
The self-storage facility and a nearby abandoned hotel were roped off until beekeepers were called in.
As a precaution, school officials kept students indoors for the rest of the day. 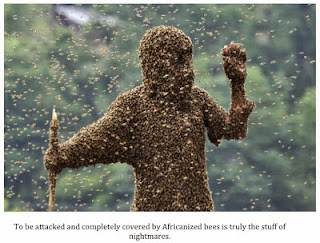 Obviously, the report is short on details and there is no mention of the condition of the victim. There is no word yet on whether the bees involved in the attack were of the Africanized variety, commonly referred to as killer bees, but it seems a safe bet.

The theme of someone out mowing and being attacked is a common one when it comes to bee attacks. On August 26, 2013, a Waco man was taken to a local hospital after being stung dozens of times by bees that he accidentally disturbed while mowing his lawn. The bees responsible for this attack were identified as normal honey bees initially, but other officials felt that designation was premature. To my knowledge, though some officials felt the bees were of the Africanized variety, the label was never changed.

In June of 2013, a Moody, Texas man was attacked and killed by a swarm of Africanized bees as he drove his tractor by an abandoned chicken coop on his property. Larry Goodwin was stung more than 1,000 times and died at the scene. His wife and daughter witnessed the attack and rushed to try and help. They were each stung more than 100 times but survived the onslaught.

In July of 2012, a swarm of killer bees attacked and killed two horses and seriously injured two adults near Pantego, Texas. According to the owner, her two horses were “so covered in bees that they shimmered,” before they were overcome and collapsed. The owner and her boyfriend were stung upwards of 200 times while trying to save the horses.

There are other incidents involving Africanized bees ranging from the Rio Grande Valley to north of the Red River but you get the idea. 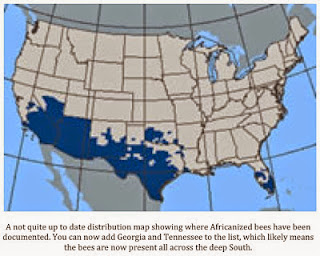