Below is the latest version of my black panther distribution map. The map now includes the latest reported sightings deemed credible and discussed in my post on the subject dated 8/8/14.

Understand, this map is not meant to be exact. I am bound by the amount of detail given to me about sighting locations by witnesses. If you are looking for GPS coordinates to get you within 20 yards of a sighting location then this map is not going to do it for you. It isn’t meant to. My intentions in mapping the sighting locations was to get a broad sense of where these cats were being spotted and hope to pick up on some “big picture” type of pattern. The overall locations are as accurate as they can possibly be on a map to this scale. 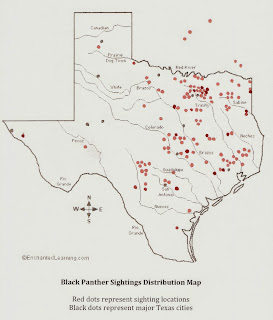 I do think that some patterns are starting to make themselves clear as the sample size increases. It has become obvious that if you live in north Texas, the area north and northwest of Dallas is the place to go looking for a large, black, long-tailed cat. In particular, the area surrounding Lake Lewisville is a real hot spot. The sightings are coming in from this area so quickly that I’m running out of room on the map.

Other areas that are emerging as black panther hot spots are southeast Texas between the Brazos and Neches Rivers, the Brazos Valley of central Texas and the southwest edge of the Texas Hill Country just west and northwest of San Antonio. A good rule of thumb as to where to look for these cats still seems to be the headwaters of major rivers or areas where major rivers converge and flow in close proximity to one another.

I hope to take this project up a notch and really zero in on sighting locations. I will still keep up with this distribution map but will also be creating maps of regions of the state. This will allow me to zoom in and provide a more accurate picture of exact sighting locations. I’ve been doing this on my own using an old Texas map and some pins. I feel like there is enough interest in this phenomenon to make it available to readers of the blog.