Below is the latest version of my black panther distribution map. The map now includes the latest reported sightings deemed credible and discussed in the previous two posts on this blog.

Understand, this map is not meant to be exact. I am bound by the amount of detail given to me about sighting locations by witnesses. If you are looking for GPS coordinates to get you within 20 yards of a sighting location then this map is not going to do it for you. It isn’t meant to. My intentions in mapping the sighting locations was to get a broad sense of where these cats were being spotted and hope to pick up on some “big picture” type of pattern. The overall locations are as accurate as they can possibly be on a map to this scale. 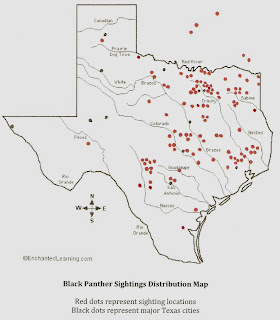 As for patterns, those previously discussed seem to be holding. Nearly all of the sightings have taken place near major waterways. In particular, sightings tend to bunch up near the headwaters of major Texas Rivers like the Sabine, Neches, Trinity, Guadalupe, San Antonio and Nueces. The exceptions to this pattern would seem to be the sightings reported along the Brazos and Colorado Rivers. It could be argued, however, that about the point the Brazos and Colorado become more than just a trickle is the point where sightings begin to take place with some measure of regularity. It should also be kept in mind that the upper reaches of both of these rivers lay in very sparsely populated areas where sightings would be less likely due to the dearth of human occupation.

The sighting map is also beginning to resemble the map of wood ape sightings in the Lone Star State as compiled by the NAWAC. Basically, the number of ape and black panther sightings increases the farther East one travels across Texas. This correlates nicely to the average amount of rainfall each region of Texas receives. Again, the farther East you go, the more rain you get. It is interesting to note that the areas where the Texas Parks & Wildlife Department admit to breeding populations of mountain lions, the Trans-Pecos/Big Bend region and deep South Texas, there have been next to no reports of large, black, long-tailed cats. What that means can only be speculated upon.
Posted by Mike at 1:46 PM